The Soul, the Elephant and the Owl 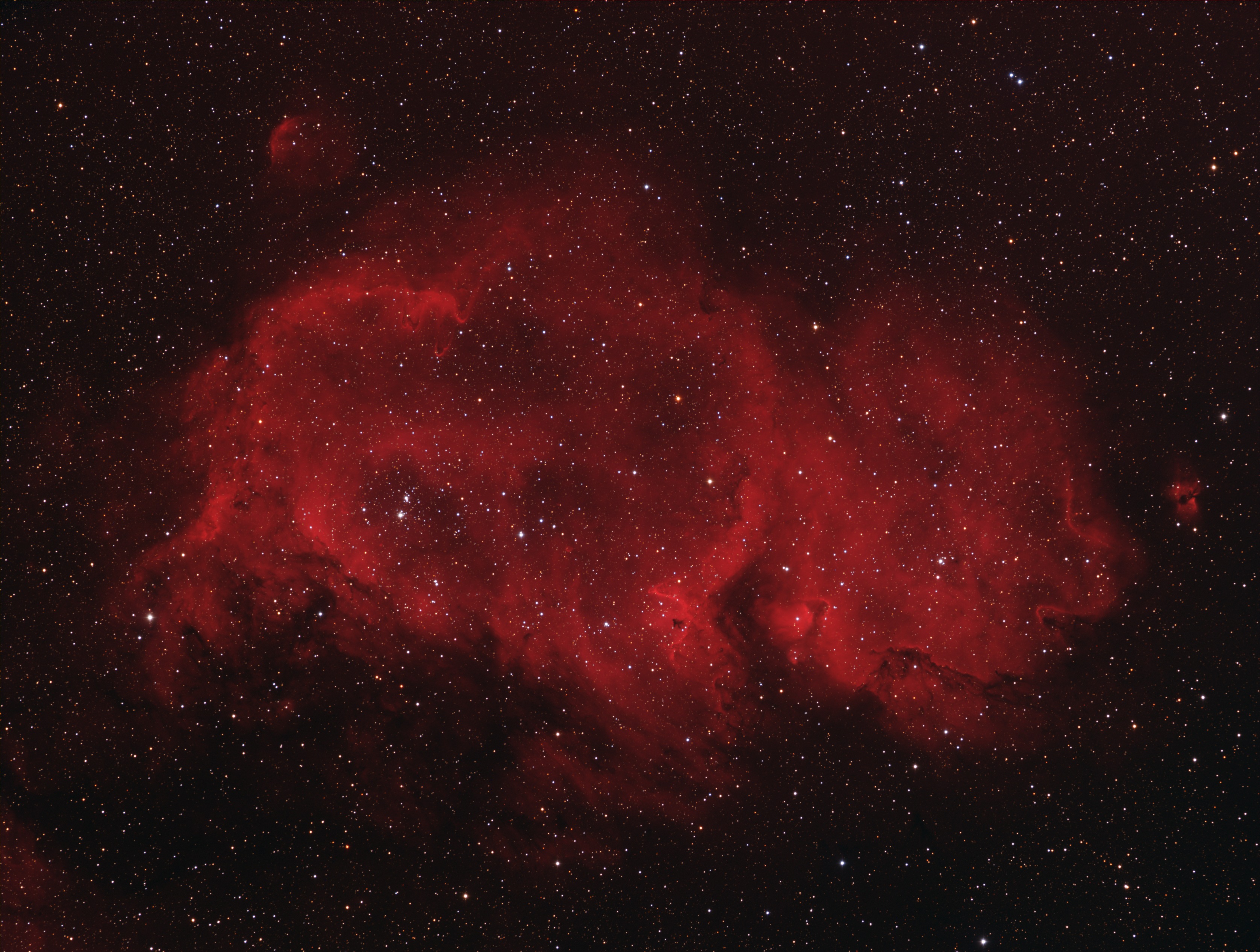 This is the Soul Nebula, a fairly large and bright emission nebula in the Cassiopeia constellation. Last year I took a picture of its near neighbor, the Heart Nebula so this year I went after the Soul.

This was the only image I got from outside the city and was done at my usual spot at a friends cabin. Things went very well this time and I was able to get a good number of hours in and almost all the data I acquired was used in the final image.

But that was basically it for prime imaging for the year. Other than a short period in September, the weather was just too unsettled to justify taking the gear out there. Instead, I grabbed data a few hours at at time from the back yard when the opportunity presented itself. 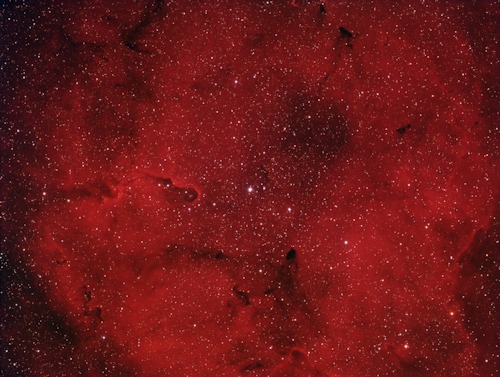 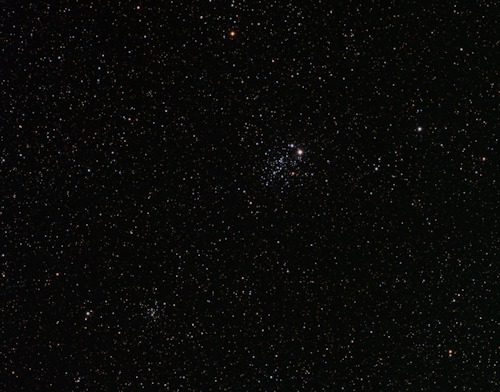 These two were taken over the same few nights. The goal was to get as much time as possible on the Elephant's trunk. For this, the mount would start early and pick up the nebula as it rose in the east. Then it would track well past the meridian, almost to the point where the camera would hit the tripod.

But fortunately the mount has limits built in so it would stop before crashing the camera into the tripod.

So at that point I would intevene and repositon the mount to catch the Owl Cluster as it rose from the east. This used up whatever dark time was left for the night. Yes, tedious and required manual intervention. Critical video games did get interrupted and animes sometimes went unwatched but it was an efficient use of telescope time so it simply had to be done.

Also, by going for two targets per night, I had much better odds of at least one success. And given enough nights, I should also get lots of data. Mostly true but really, there never is enough nights.

Anyway, the Elephant's Trunk Nebula is a fairly bright emission nebula in the constellation Cepheus. And the Owl Cluster is a very nice cluster in Cassiopeia. 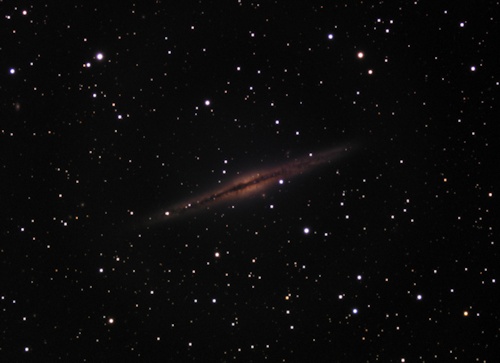 This is galaxy NGC 891, an edge-on spiral found in the constellation Andromeda. It seems that edge-on galaxies are easier to photograph from the city than face-on galaxies.

I think its because the light is more concentrated and that makes it easier for the equipment to pick up the galaxy against the background light pollution.

This is also the first image from my Celestron Edge 11 in over a year. Between getting the Mak-Newt working and doing upgrades to the Televue focuser I'd neglected the big SCT for awhile. So this summer I dusted it off and took it camping.

But on the camping trip, it got kind of knocked around and really didn't work well for me. I mean, sure I could see stuff but everything looked kind of fuzzy and ill-defined.

So back home I tried the scope some more and noticed corrector was easily fogging up and that it generally looked dirty and dusty. Normally this is not a problem, just carefully clean it and away we go. But this time the dirt and dust was on the inside as was the fog on the corrector.

So I very carefully opened it up and cleaned the corrector and secondary. Then I very gently brushed the primary mirror and vacuumed up the dust off it using a custom made vacuum extension tube with an ultra soft brush on the end. Then it was carefully reassembled. Before disassembly I'd used tape markers to ensure it all went back together the right way.

So, it did go back together properly and the next clear night I took under the stars and did the collimation. I think I did well because once collimated, the tube gave me among the best views I've ever had from it. So I just had to put a camera on it to see how well it really worked. Well, the stars are round, the colors look right and there's detail in the galaxy. No complaints so far. 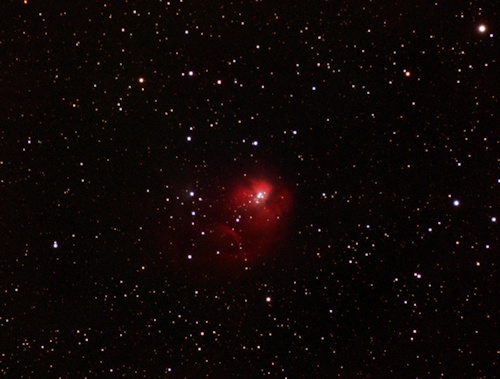 And this brings us to the last image of the season. This one almost didn't make it because there is so little data. It is another nebula, NGC1931 in the Auriga constellation and is one of the few nebula I've tried the SCT on.

I'd previously viewed and taken pictures of NGC1931 before but was never able to see the nebula. Even the related cluster is kind of small and sparse so there were times I wasn't even sure I was looking in the right place.

But one night after imaging NGC 891 there were a few hours of darkness left so it seemed like it was worth trying one more time.

After pointing the scope to where the nebula should be and I ran a test image with the Ha filter. And sure enough, a small faint nebula showed up after just a few minutes.

So, I queued up a series of images and let it run. But not all was well that night and some time after turning my back on it there were tracking problems. Usually I like to blame the mount when this sort of thing happens but this time I think it was, um... well, operator related. Anyway, all I got was two useful images from each of the filters. Only 8 measly frames, not even an hours worth of data.

But after a few tries at processing it came out almost ok. And it is actually better quality than a few other images you might find on this site so up it went. And that was it for the year.

The next day clouds rolled in so I tore down the mount and put all the gear away. Then it started snowing, and suddenly its winter and the season's over until next year.

So as always, thanks for looking and see you again next season...