IC5146, The Cocoon Nebula in Cygnus

Recently a friend let me set up for the weekend at his acreage just south of Armena, Alberta. The viewing was great and I was able to set up three of my four scopes. Unfortunately, due to the almost full moon, I was only able to take one good image. Here it is: 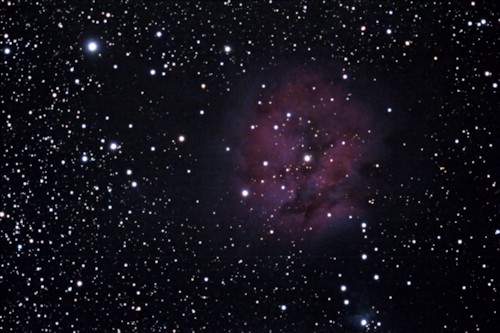 Taken from Sid's acreage near Armena

Because the moon didn't set until quite late, I didn't get started on this image until sometime after 1am. Due to the late start, I only obtained a little over two hours of usable light frames. As a result, this image is not quite as bright as some others I have seen of this nebula.

Even with only two hours of exposure, the image still is pretty good. A lot of the detail in the emission area of the nebula is quite visible.

The reflective portion did not really come out though, instead it shows up as the dark area surrounding the nebula. Even so, this image still shows a lot of the main part of the nebula so I decided to post it here anyway.