M27 and The Blue Snowball

On the final weekend of September I was able to get a couple of new nebula images. The first is yet another image of M27, the Dumbbell Nebula and the second was a shot of the Blue Snowball Nebula.

M27 - The Dumbbell Nebula in Vulpecula 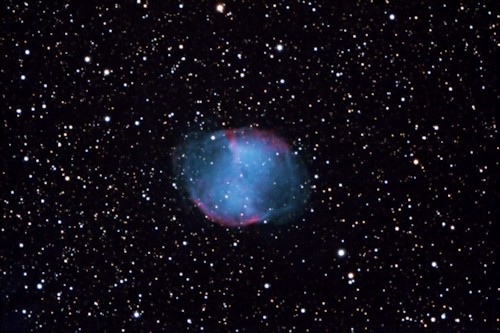 From an acreage east of Warspite, Alberta

This is the latest image of M27, the Dumbbell Nebula. It was a bit windy that night and most of the raw images ended up being rejected. The top five frames were kept and stacked into this picture.

Fortunately, M27 is really bright and the few good frames I collected were enough to get a reasonable image.

This image was taken an 11" EdgeHD telescope and Canon 60Da DSLR. Guiding was done with Starshoot autoguider and Celestron OAG. 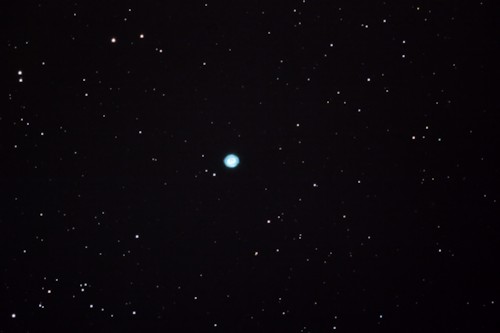 From my backyard in Edmonton, Alberta

On a clear moonless night with no wind at all I decided to set up in the back yard and try to improve the autoguiding. While I was doing this I noticed that the sky seemed pretty dark and I could see quite a few more stars than usual from my totally urban location.

Then I realized a nearby construction accident had knocked out most of the streetlights on our block. At that point I stopped fiddling with the autoguider and started imaging.

The end result is this picture of the Blue Snowball. I was particularily happy to see the central star and surrounding luminous ring. I had never seen that visually and never expected to pick it up in an image, particularily one taken from the city.