Pictures from the CFF 132 Telescope

These are the pictures from the new CFF 132 refractor I received in August 2017. The telescope is the last of a limited run made by CFF and mine carries the serial number "010". As a former computer person, I do indeed like that particular serial number.

Below is M103, a star cluster in the constellation Cassiopeia. This is the first picture off the new telescope and it was taken from the back yard. 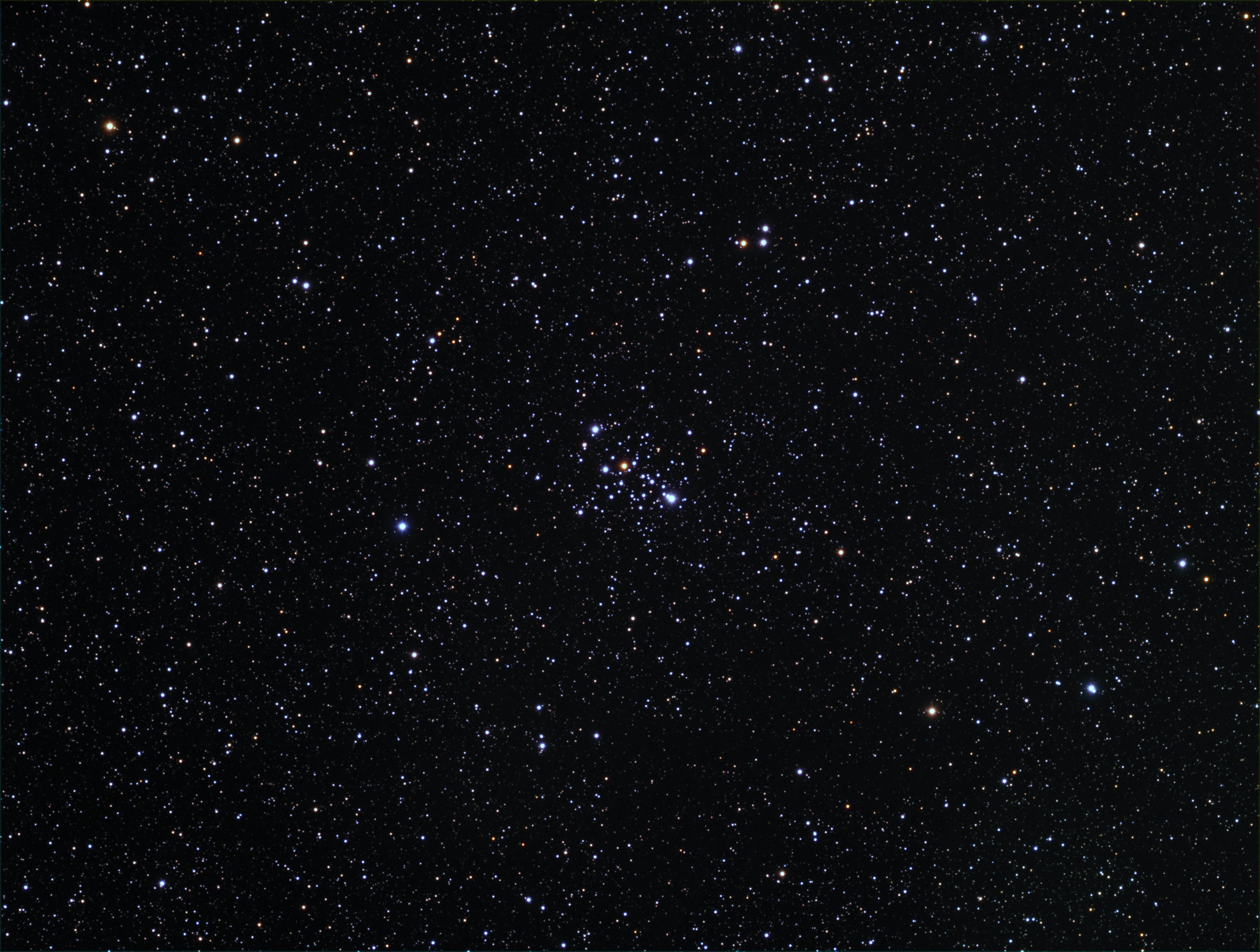 M103, A cluster in the Cassiopeia constellation

M103 (also known as NGC 581) is a bright open cluster that is fairly easy to find in even small scope or binoculars.

But in an image like this, the cluster is almost lost in the surrounding star field. The camera is not the same as a human eye and it does a really good job of picking up and recording faint stuff.

Still, the cluster is fairly easy to photograph from the city and was in a good position overhead at the time. And it has lots of stars everywhere around it too so its a good way to evaluate the perfomance of the new scope out to the edges of the camera sensor.

And so far, things are looking really good. The stars are round all the way out to the edges. The colors looks correct and the contrast is very impressive too. And the overall image quality so far looks to be as good, if not quite a bit better than any other scopes used for imaging on this site.

M76 - The Little Dumbbell Nebula
Since the backyard test succeeded, the very next night I took the rig out of town to a semi-dark site near Lindbrook.

M76 - Little Dumbbell Nebula
The nebula image below is the first image from that trip and is the very first dark site image taken with this particular telescope.

There was cloud that night and a lot of the exposures were unusable. But there was still enough frames left over to put together a passable image of the nebula core.

The image also contains a hint of the nebula's outer shell. In this image the shell is pretty faint though and in the full size in the nebula itself is rather small too.

To see any amount of detail you will need to zoom in on the nebula. Once there, look for the faint color in the outer shell that sort of forms wings on either side.

Deer Lick Group and Stephan's Quintet.
The field of view in the CFF field is easily big enough to get both of these galaxy groups in the same frame. 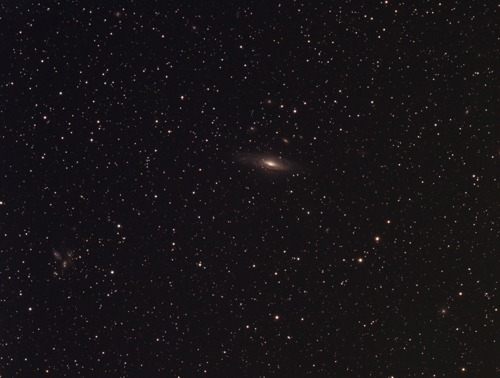 Deer Lick Group and Stephans Quintet
The camera field is quite a bit smaller but it all did fit on the sensor. So, over the course of two nights a few hours worth of data went into this one.

The biggest and brightest galaxy in this image is NGC 7331, also known as the Deer Lick Galaxy. The rest of the Deer Lick group are mostly above and to the right of NGC 7331.

Stephen's Quintet is the small cluster near the lower left edge of the photo. Both groups are fairly faint and it's best to zoom in and pan around to see the galaxies they contain.

There is not a lot of detail in this one and like the M33 image below, it's pretty noisy. (Noise being the "speckles" you often see in the background when zooming in.)

M33 - Triangulum Galaxy
After having taken pictures of a cluster, a small nebula and some small galaxies, it was time for something big and bright. Of all the visible galaxies at the time, M33 looked like it would work very well with the field of view of the new CFF. 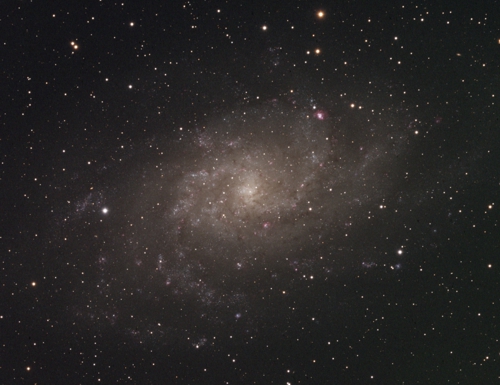 So I pointed the scope that way and managed to collect three hours of data, all of which went into this image.

As mentioned above, if you zoom in, you will see the image is still pretty noisy. And a lot of the details are not quite fully formed either.

But on the other hand, a lot of the tiny pinpoints that make up the galaxy are coming through. Plus, the details that do come through are pretty good actually. So the potential is certainly there for a much better picture.

Sadly though, there was not enough time for this one. After collecting the three hours of data the one night, the clouds rolled in the next day and stayed rolled in. And rain was coming too so I had to pack up and take the rig back to the city.

PacMan Nebula
Once the rig was safely home, a few day later it cleared up. So, it was time to try some narrowband imaging with the new telescope. 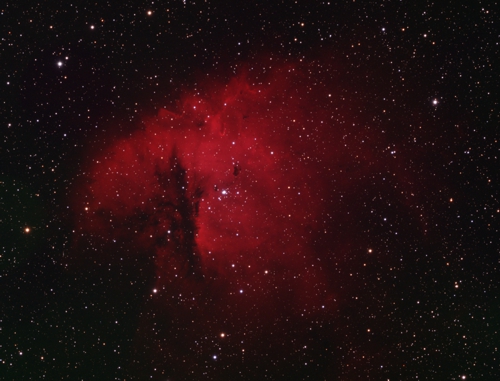 NGC 281 - PacMan Nebula
With no rain in the forecast, it was much easier to get a lot more data. A little over twelve hours was gathered this time and it shows.

The details in the nebula are starting to come through and the overall impression is rather good.

The RGB (red, green, blue) filters were used fore this image, but only to collect enough data to colorize the stars. The rest of the image, ie: the nebula itself, was collected mostly through the H-alpha filter.

The Ha filter does a really good job of rejecting light pollution, moonlight and other bright light like nearby stars. The remaining light it picks up is the specific emission band given off by ionized hydrogen in the alpha state. This band is deep red and images of it contains the details that reveal the structure of the nebula.

The Double Cluster
Below is a two panel mosaic of the Double Cluster. This is a famous pair of clusters in the Perseus constellation. They are quite bright and can be seen with the naked eye. 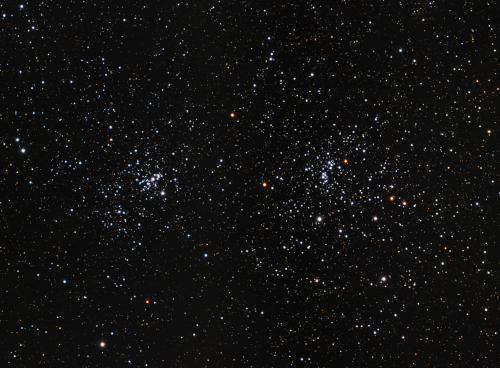 There are a few other pictures of these clusters on this site so you can compare the differences between attempts.

The image came out pretty good but there was some color separation due to the atmosphere. When the temperatures drop around here, the denser air seems to cause the colors to separate out a bit.

The end result is usually uneven colors on one side of the stars or the other. Some color plane adjustments can be done to fix this, but the problem was pretty minor so in this case it was left alone.

Some time was spend on getting the two images to merge nicely to make the two-panel mosaic. The backgrounds needed to be evenly balanced and some adjustments were done to get common color and brightness levels across the image. The color and brightness adjustments worked out pretty good, but the darkness level are still a bit uneven across the image.

M34 - Open Cluster in Perseus and IC 417, Emission Nebula in Auriga
Once I had a new image of the Double Cluster, I decided to try M34, a single cluster in the constellation Perseus. 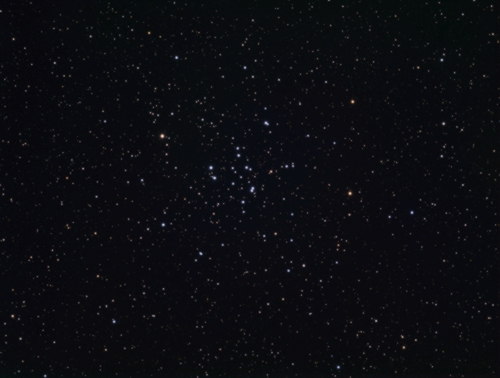 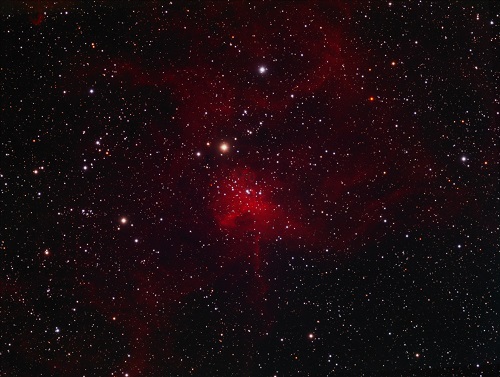 The M34 image came out pretty good but a color separation problem was evident in the raw data. The red, green and blue dots didn't exactly line up and the stars tended to red on one side and blue on the other. To minimize this effect, I made some alignment adjustments and was able to get the colors to mostly line up correctly.

IC 417 is an emission nebula in the Auriga constellation. This one took a little over seventeen hours of data and even so, most of it is pretty dim. Still, the main central structure came through and the basic outline of the rest of the nebula shows up as well.

There are some other pictures that didn't make it to the site this time. I tried some galaxies and star images. The galaxies were a good start but there was not enough time to get good images. Most of the stars ended up on Wikipedia, but that's a work in progress for another time.

Until next time then, keep looking up.