These are the last pictures from the autumn of 2019 and the earliest spring images from 2020.

Below is an H-α image of IC410, The Tadpole Nebula in Auriga 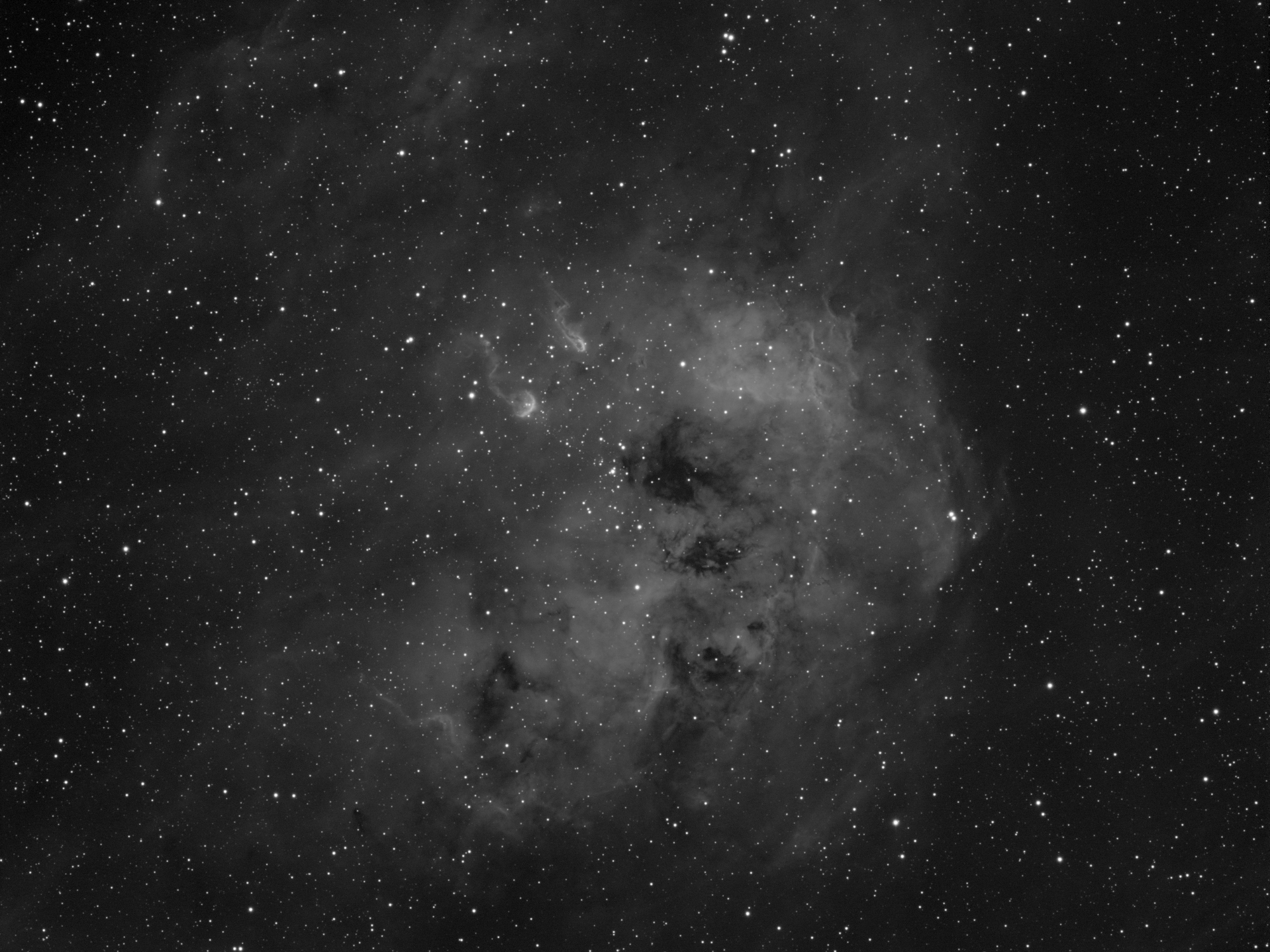 IC410 - Tadpole Nebula in Auriga
The Tadpole Nebula is an emission nebula in the Auriga constellation. The image was taken from my backyard over a few nights during October of 2019.

This image is monochrome and was taken through the hydrogen-alpha (Hα) narrowband filter. The raw data consisted of 42 Hα frames of 15 minutes each. The total integration time was 10 hours, 30 minutes.

More Images from Auriga
The Auriga constellation is home to numerous deep sky objects and lots of bright stars. The Tadpole Nebula shown above is in this constellation along with the open clusters like M36 and bright stars such as Eta Auriga. 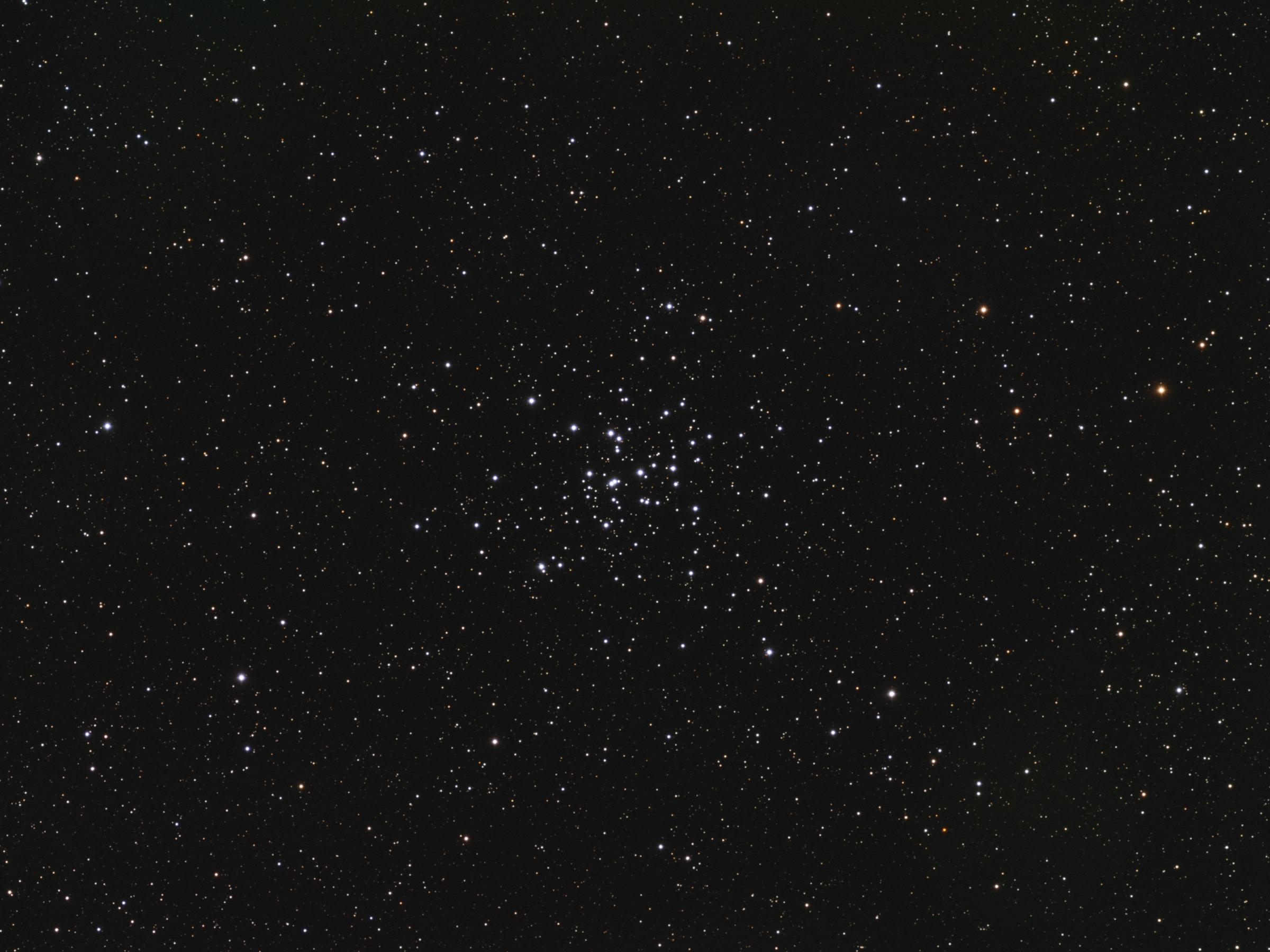 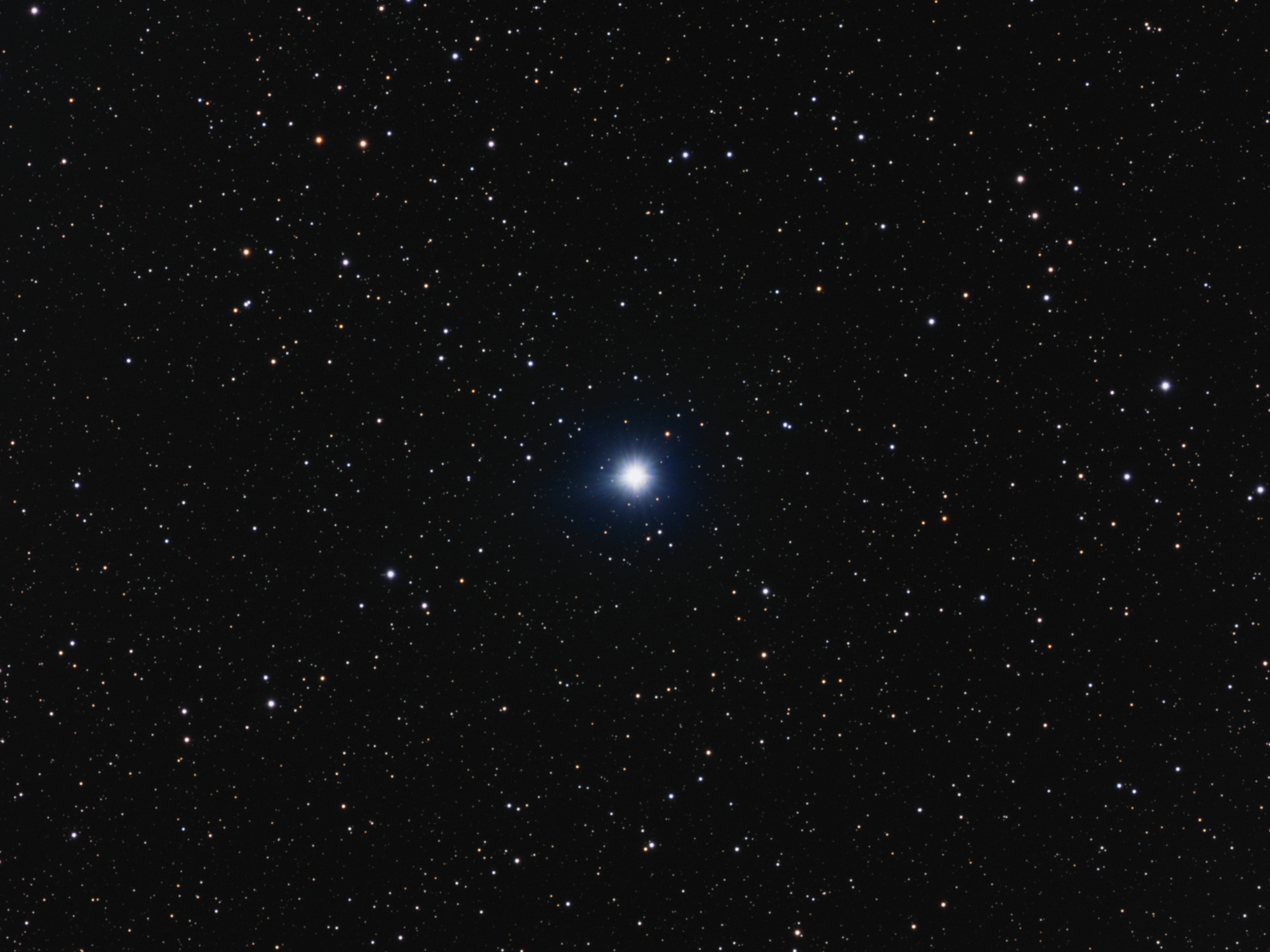 Messier 36 is an open cluster in Auriga and is located near two other bright open clusters, Messier 37 and Messier 38. All of these clusters can be spotted with binoculars and are popular to observe with wide field telescopes.

Eta Aurigae is a moderately bright blue-white star in the Auriga constellation. It can be spotted with the naked eye and is easily observable with virtually any telescope.

New Carbon Star Images
There are some new images in the carbon star gallery. 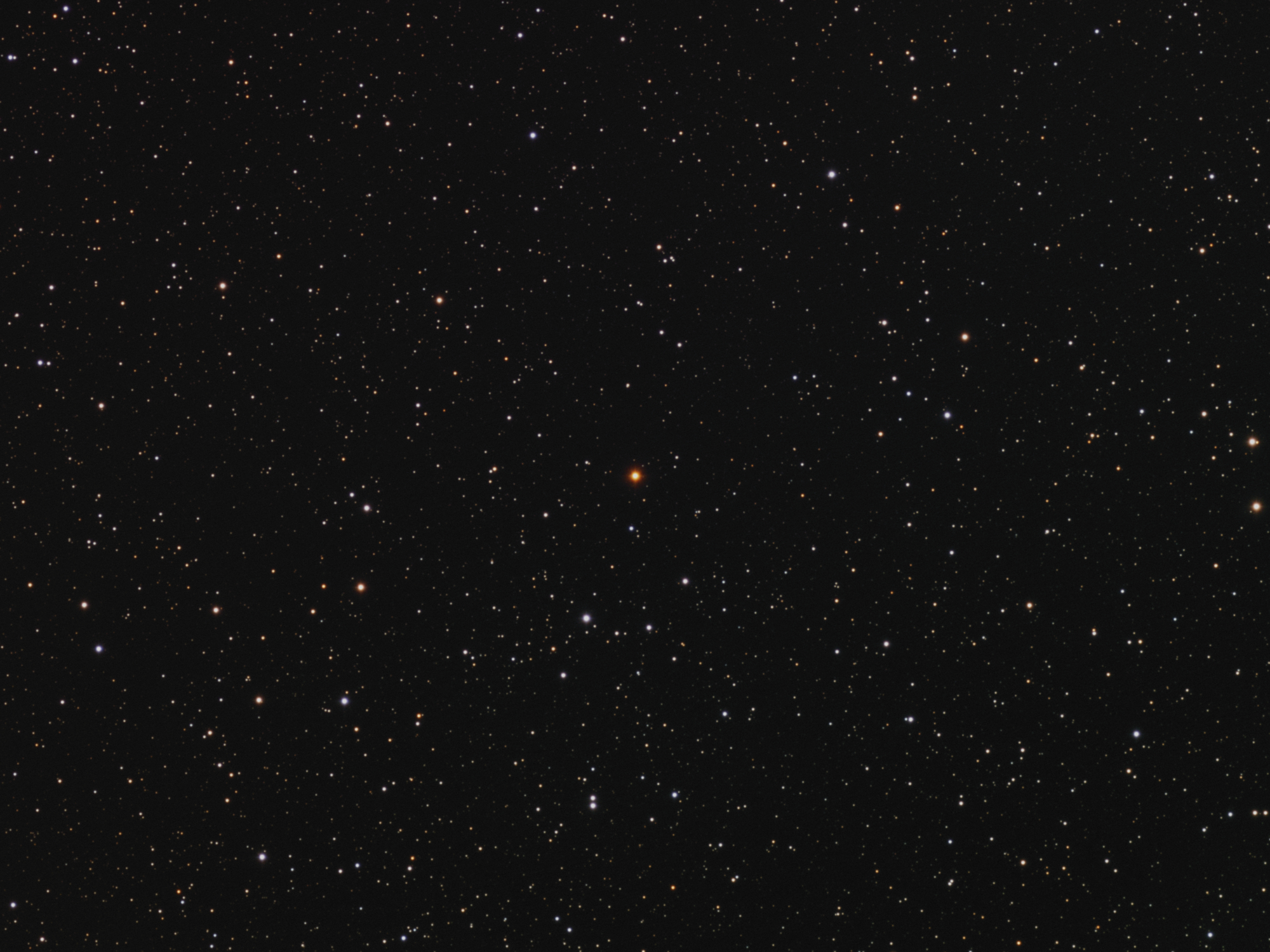 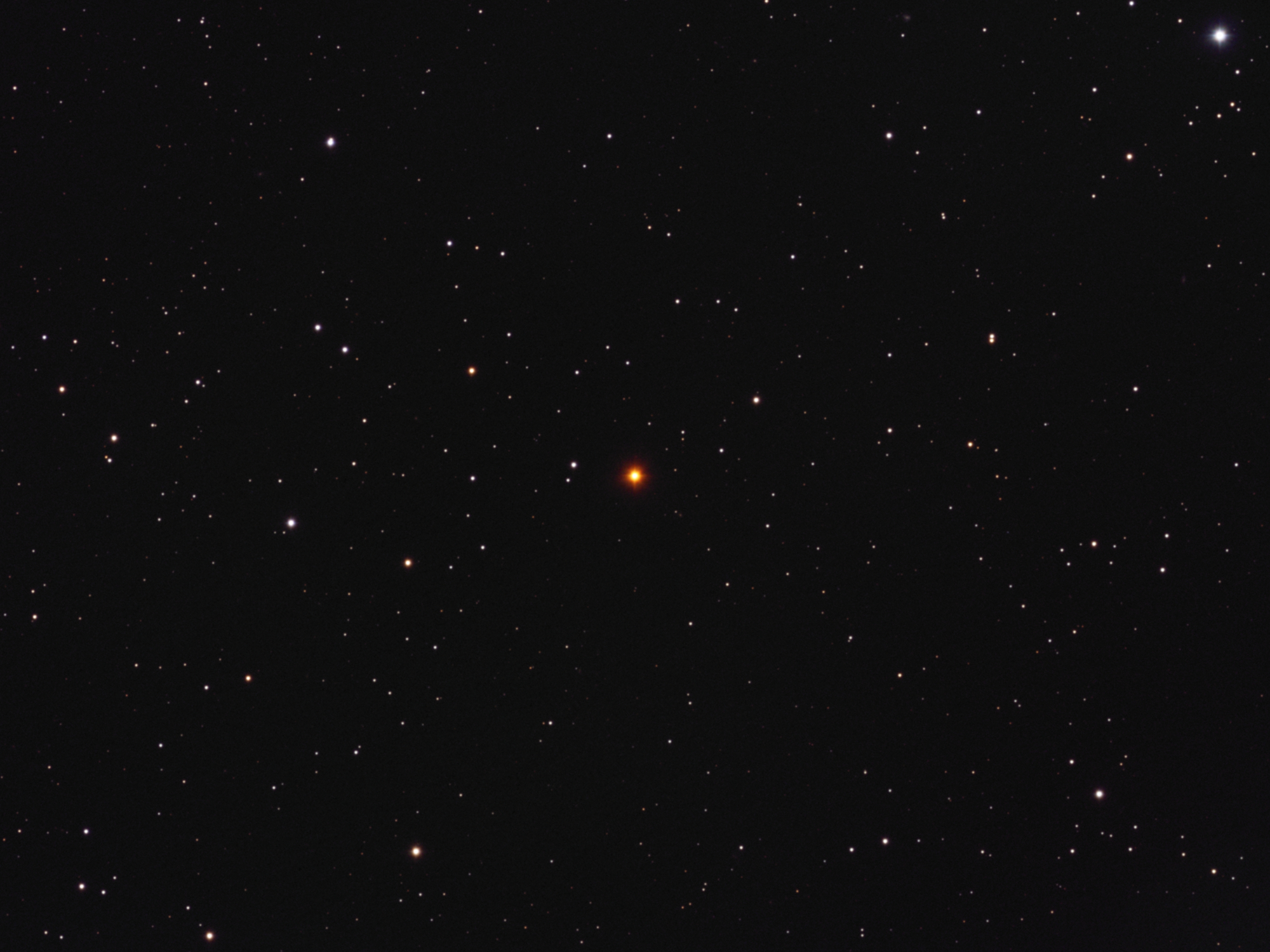 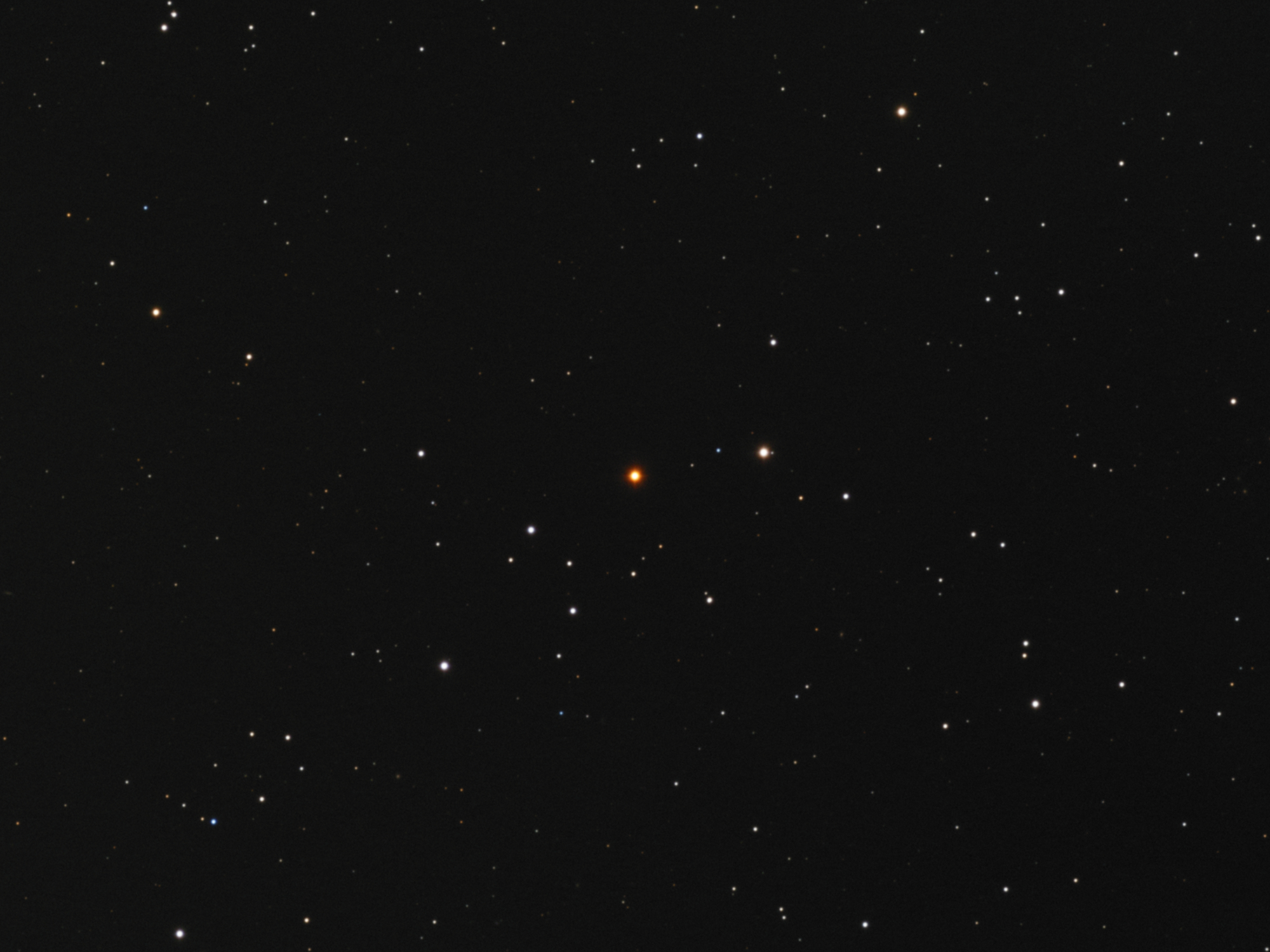 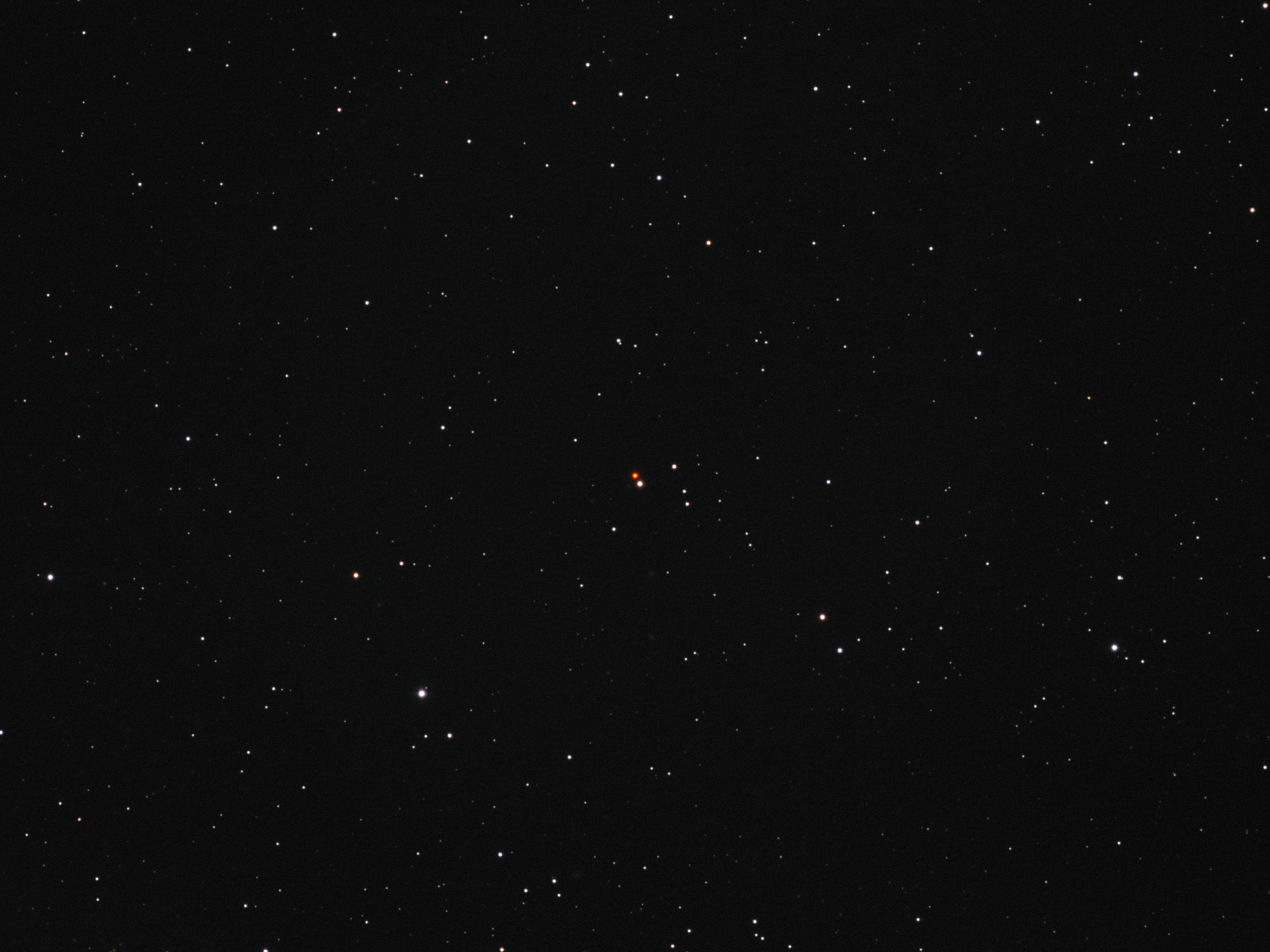 T Draconis
W Cassiopeiae is a small and faint carbon star in the Cassiopeia constellation.

AQ Andromedae and RR Herculis are two other carbon stars, this time in the Andromeda and Hercules constellations. T Draconis is found in Draco and is the smallest and faintest of the carbon stars in this release.

All of these stars are too faint to be seen with the naked eye and a telescope is necessary to observe them visually.

Visit the Carbon Star Gallery
New Single Star Images
There are a few new images in the single star gallery. 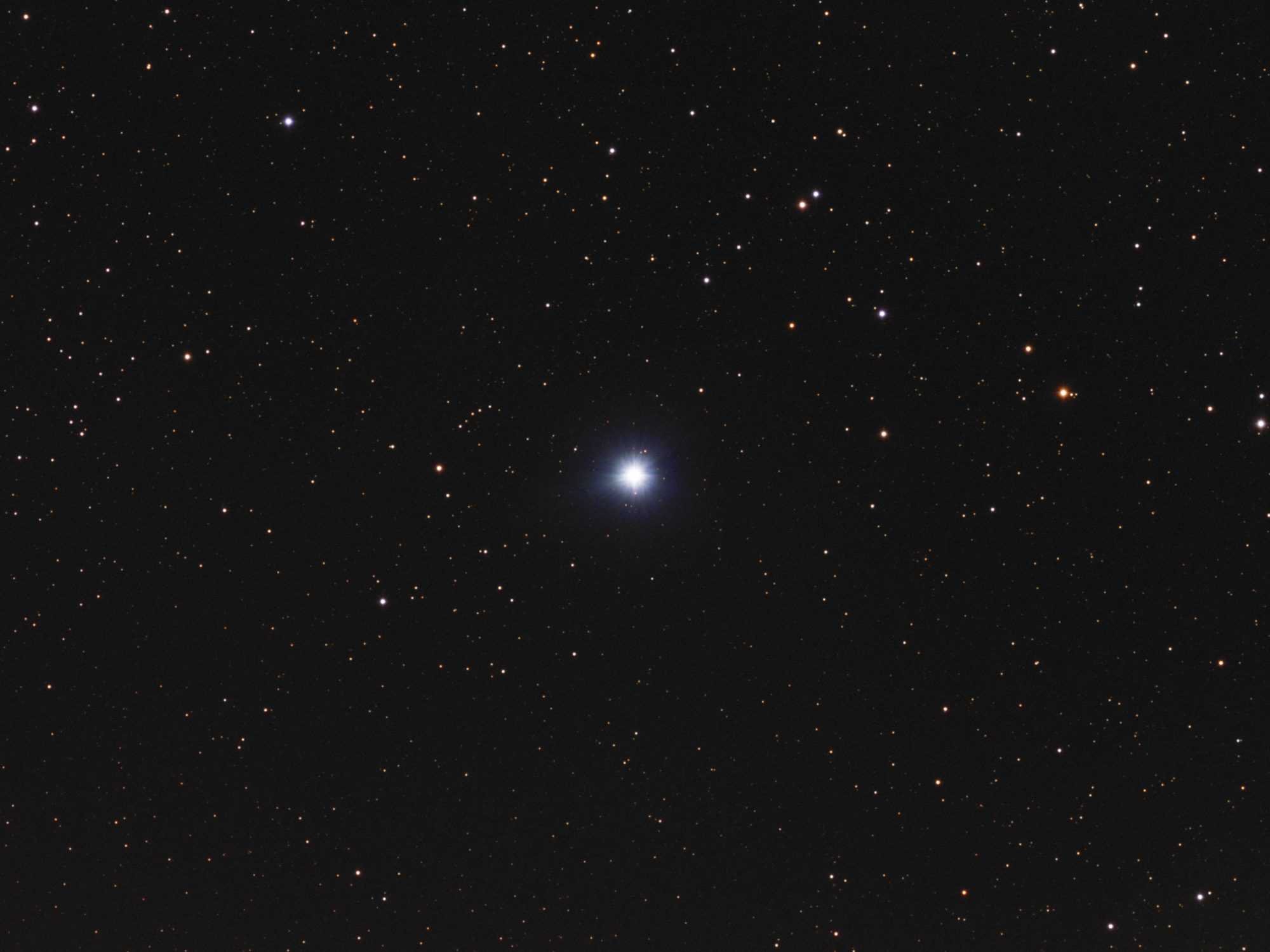 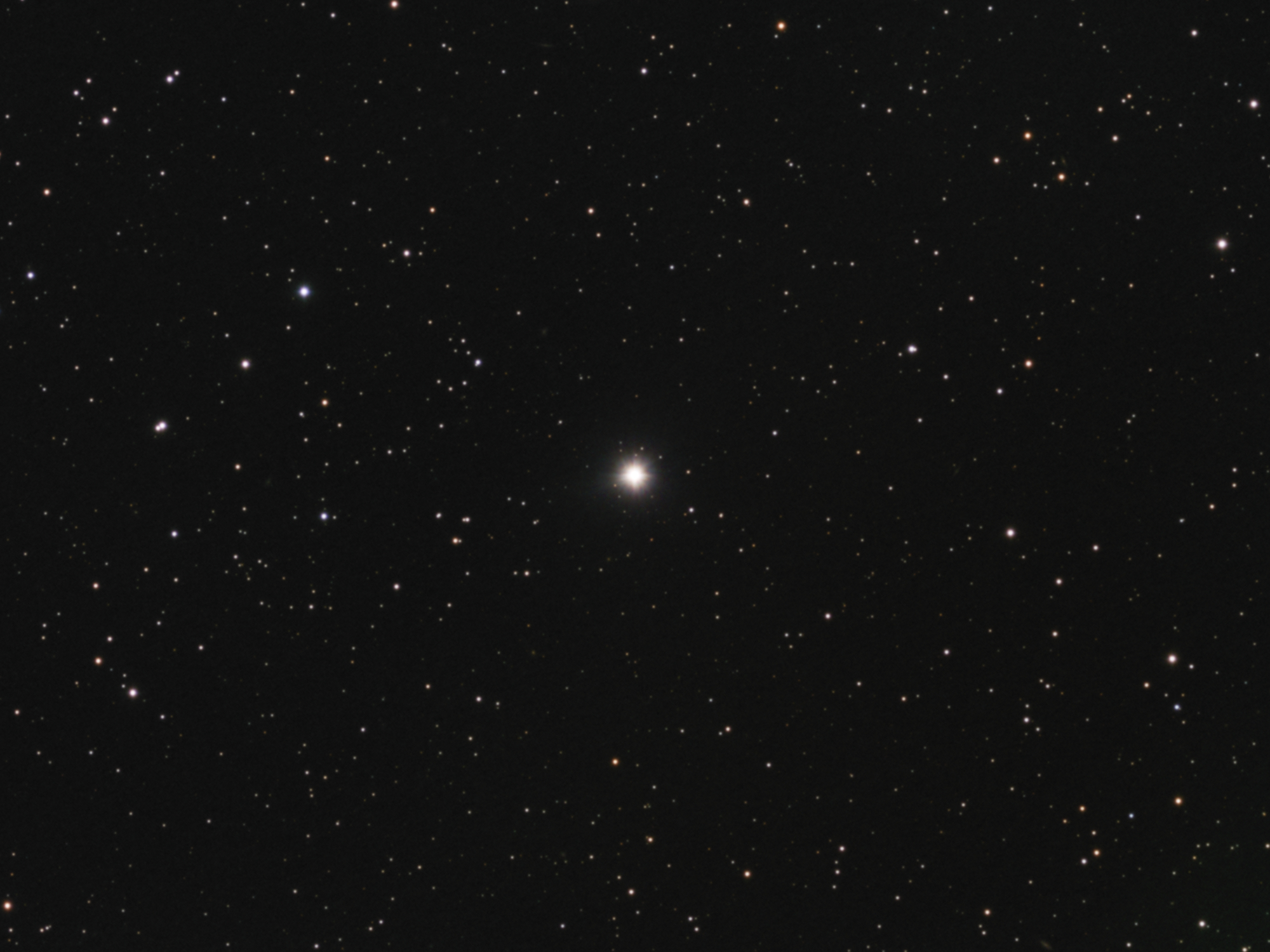 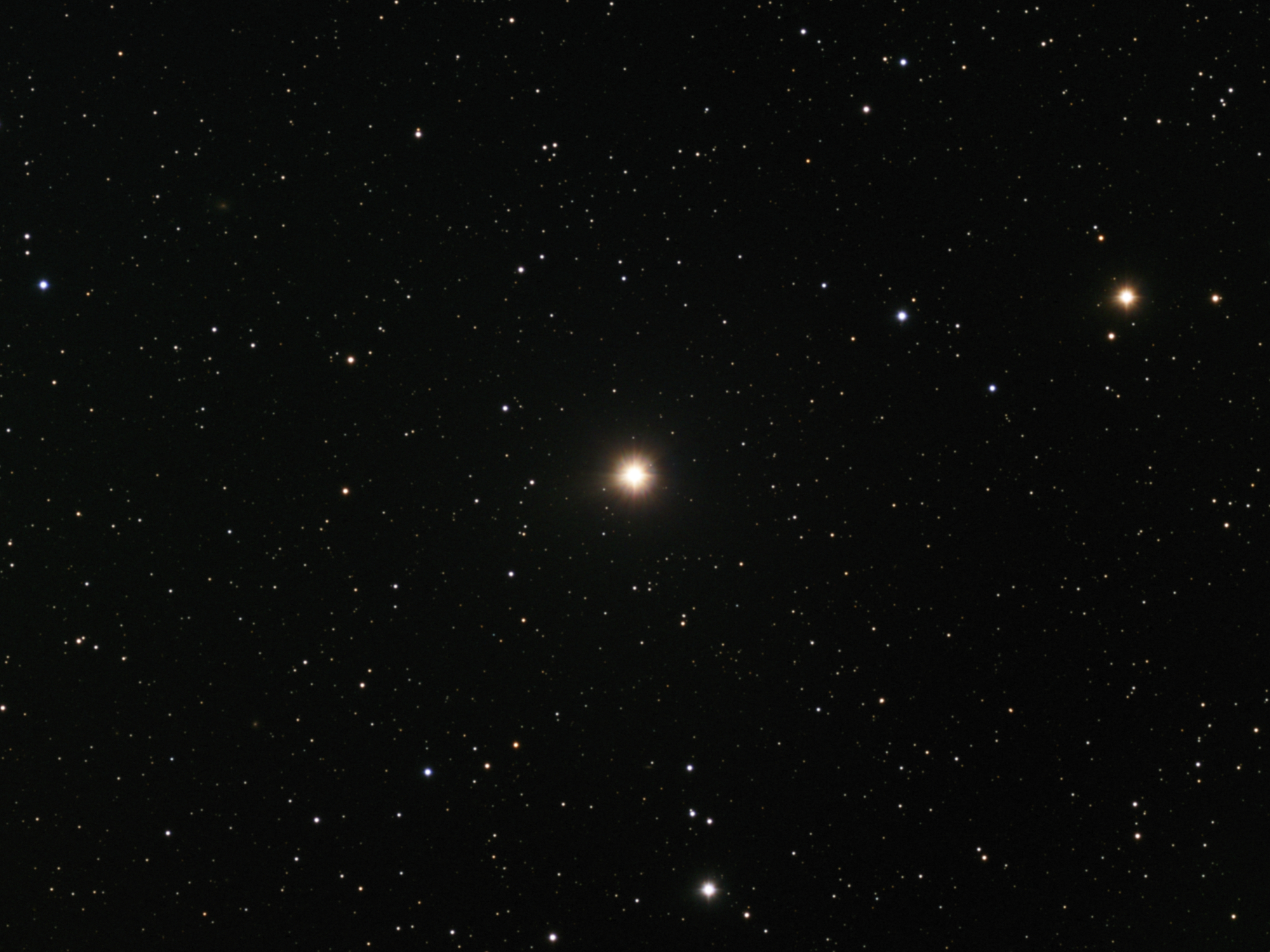 18 Draconis
50 Cassiopeiae is a blue-white star located in the Cassiopeia constellation.

HIP 7918 is a solar analog star located in the Andromeda constellation. This star may support a habitable zone around it and it is a candidate in the search for life. A METI message was sent to this star in 2003 and will arrive there in 2044.

51 Andromedae is a star I photographed some years ago with the MN190. This time I tried it with the CFF and used different processing and imaging techinques. It came out a bit different all right and was the last image from 2019.

18 Draconis is a giant star located in the Draco constellation. This is a barium star and has certain pecularities in it's chemical makeup.

Also in the 18 Draconis image is a hot blue subdwarf, another unusual object. Most blue stars are actually white stars with a subtle blue tint. But PG 1640+645 is a bona-fide blue stellar object and is included in the Revised and Updated Catalogue of the First Byurakan Survey Blue Stellar Objects (2008, Mickaelian, A. M.).

For more information on these stars and a close up crop of 18 Draconis (the barium star) click here or on either of the images.

Visit the Single Star Gallery
New Double Star Images
Here are the most recent additions to the double and multiple star gallery. 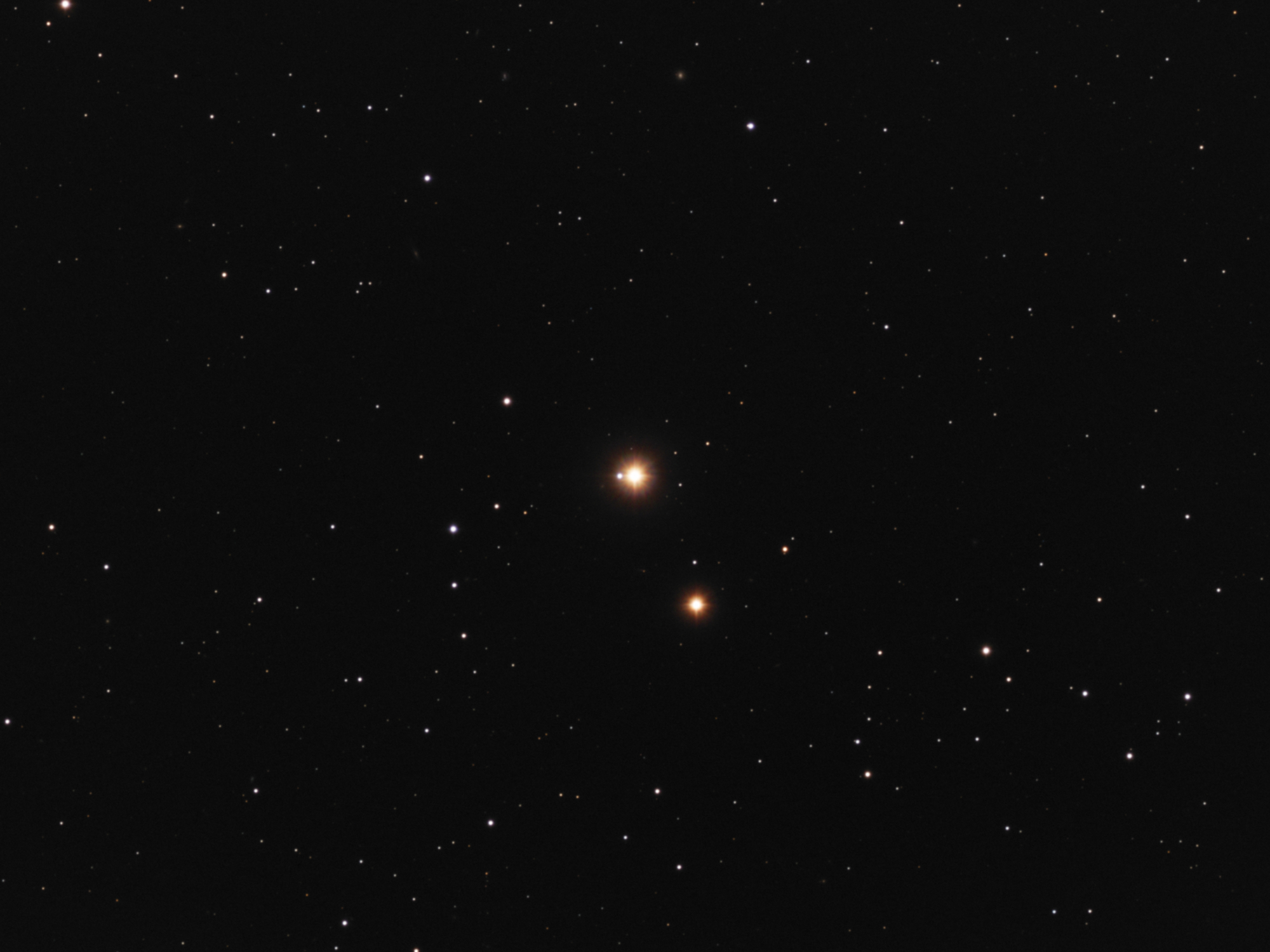 42 Herculis and V906 Herculis are a pair of orange M type stars in the constellation Hercules. This image is from the first session of the new year and was taken in mid-April of 2020.

Mu Draconis, officially named Alrakis, is one of the brighter stars in the Draco constellation.

Alrakis is a multiple star system. The combined primary star (μ Dra A and B) make up the bright star we can see in this image.

The Alrakis system also has a C component (μ Dra C). The C star is visible in the image, but it is quite close to the primary and is almost lost in the glare.

The C component can be spotted by zooming in on the detail page. To show it better, the image was cropped and reprocessed to remove most of the glare from the combined primary.