This is M31, the Andromeda galaxy imaged in LRGB and hydrogen-alpha (Hα) narrowband. 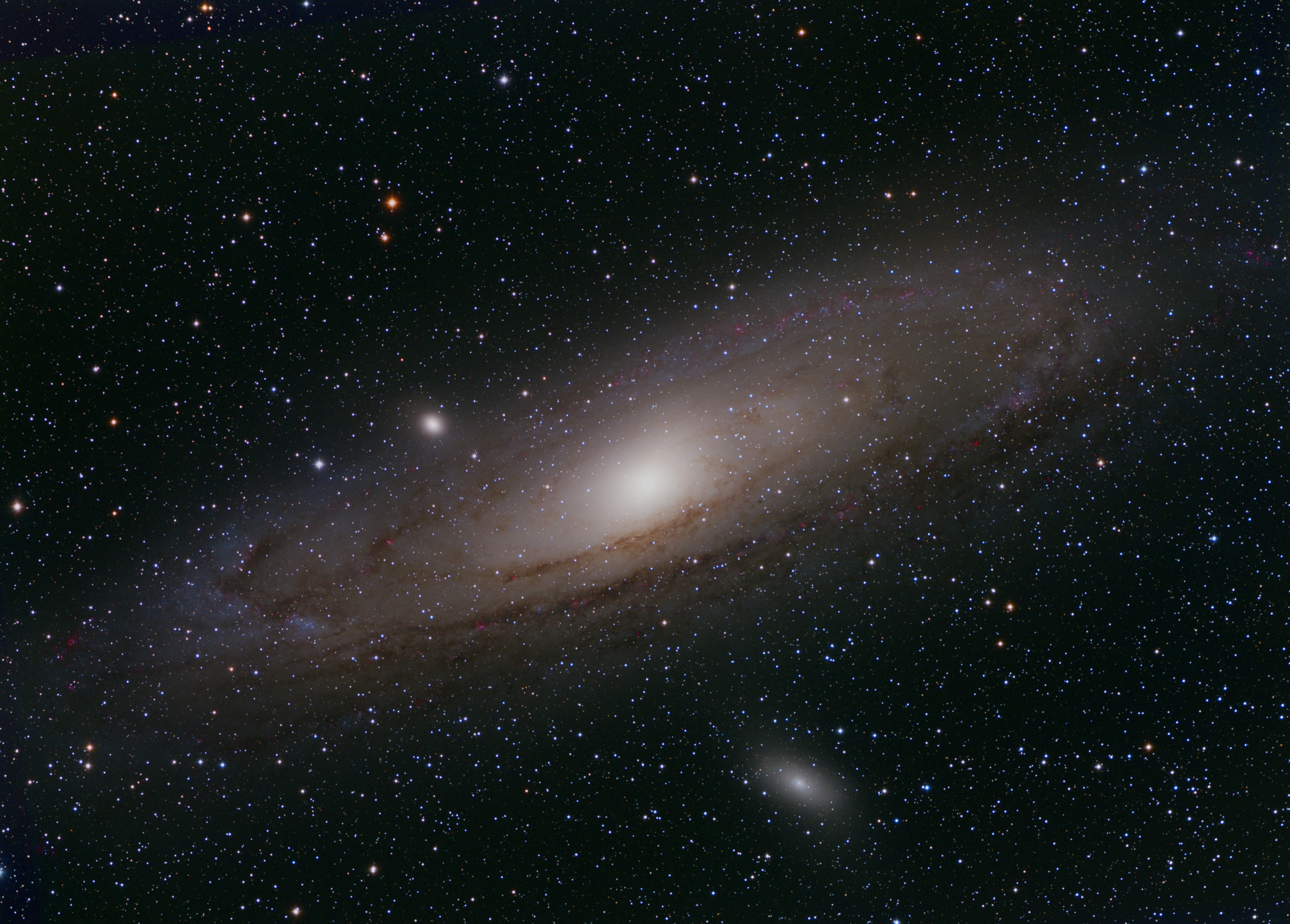 This year I abandoned DSLR's and started using cooled CCD cameras instead. I stared with OSC but now have a camera based on the KAF8300 monochrome CCD sensor (SBIG STF-8300M). It's got LRGB filters for full color imaging as well as the common narrowband ones for specialized use.

The best image so far is M31 above. It was done using the LRGB filters along with the hydrogen-alpha filter for bringing out certain highlights in the galaxy.

The new camera arrived this spring. My last website posting has the earliest images but it wasn't until summer that I really had time to come to grips with it. So when June rolled around I set up in the back yard and used the short (and not actually dark) nights for testing.

This Ring Nebula image is one of several taken during the early summer. The ring is bright, has vivid color and some good contrast. All this made it a good test for learning to use the LRGB filter set for full color imaging.

The M39 image is also from the back yard and also worked quite well.

This one was good for checking brighter stars as well as image quality out to the edges of the field.

The Veil, The Bubble Nebula and M52

Since things were working for basic color photography it was time to try some narrowband imaging. The Veil picture is a narrowband image and was taken from the back yard.

The Ha, OIII and SII filters were used to capture the data and it was blended to make a synthetic RGB image. The posted image does have a number of flaws. But it worked well enough as a test case and gave me enough raw data to try some narrowband blending techniques.

The M52 and Bubble nebula image is a true color image (LRGB) with blended Ha data to bring out the nebula.

M52 and the Bubble Nebula

The Western Veil Nebula is fairly bright and has well understood narrowband characteristics.

Also, from the back yard it was right overhead so it made for an obvious test case.

M52 and the Bubble was taken from the usual spot near Lindbrook.

This was also the first use of the large field corrector on the NP101is. The stars in the corners look better now.

A trip to Vincent Lake provided an opportunity for more narrowband imaging under a dark sky. Unfortunately the weather didn't want to cooperate so there is only about 2 hours of exposure time for this one.

Even so, the H-alpha filter worked quite well. Some LRGB data was also collected and used for the color (red) version.

Of the two, I prefer the monochrome h-alpha image. Both have full the details. But to me the finer parts are easier to see in greyscale monchrome than in red.

In October I set up shop in my usual spot at a friends place near Lindbrook. This time the weather held and I was able to leave things up for about a week during the new moon period.

Each night several hours were dedicated to gathering data on the Andromeda galaxy, M31 as shown above. In spite of one night being ruined by aurora, this still resulted in more than 7 hours of good data. The remaining available hours were split up among the other targets shown below.

The M38 Cluster image is my second try on this object. The first one was a few years ago and was done under excellent conditions but with less capable gear and very short exposure times. This time around involved much longer individual exposure time and captured many more stars.

But it ended up a bit overdone and the image seems crowded now. Its also a tiny bit out of focus so the stars are sort of bloated too. Both images are in the cluster gallery so you can compare them if you like.

The two star field images were inspired by the Hubble deep field image. The Hubble image is a very long exposure that reveals galaxies out to the furthest observable parts of the universe. My attempts are a little more modest. Still, both images picked up scores of galaxies mixed among the stars. I counted over 60 galaxies in the NGC 503 image and about hundred or so around NGC 513.

So this year, the summer and fall went pretty well actually. Despite cloud, rain and aurora I was still able to get lots of good hours under the stars. In the end I bagged a few pictures that I'm happy with and even got some visual observing in.

So, thanks Universe for being most excellent and thanks to all of you for looking.