The Galaxies Have Arrived

Spring is galaxy season in this part of the world. Unlike previous years, this time I was almost ready for it.

These were the first galaxies of the year for me. The M82 image was taken from my backyard in the city. It was a test run to shake down the gear for the season.

Since the M82 image worked out pretty well, the next night I thought I'd go out to the local dark sky site and have a try at its neighbor, M81.

So I packed everything into the van and headed out to Blackfoot for the night.

This turned out to be an interesting night. I had almost every self-inflicted problem possible. First, I was late. Then I misaligned the tripod, not once, but twice.

After that was a battle with the mount to get a good polar alignment. Finally, the wind picks up and starts pushing my telescope tent around.

I couldn't stake the tent down in the gravel parking lot because, well, its hard packed gravel and I neglected to bring a hammer.

So, I used the heavy gear bags and the computer table to stabilize the walls from the inside. That decision turned out to be even less clever than it sounds.

After a couple of hours of napping in the van, I checked in on things and found that the wind pushed the tent right up against the telescope and was busy beating on it. I looked inside and the computer table was knocked over and the laptop got dumped in the gravel. The dew shield also hit the dirt and my gear bags were missing. Turns out the wind pushed the tent right over the bags, so they were now outside the walls, not inside anymore.

Anyway, at that point you realize there is no point so you pack up and go home. I remember driving down the highway and thinking over and over "what a total disaster" (ok, "total" may not be the exact word I was in fact repeating).

Small miracles do sometimes happen. Rare but true. Other then a bent connector on the dew controller, the gear is undamaged. I also got a number of usable image frames. Not a lot mind you, but enough to get a reasonable picture of this galaxy. So you better enjoy it.

The Whirlpool and the Pinwheel Galaxies

The next trip out, things went much better.

A friend let me use her property near Blackfoot so I was able leave things set up for several nights.

This time I even brought a hammer so the tent was well nailed down and secured with guy lines.

I also came up with a much sturdier computer table and weighed it down with a large RV battery.

The extra effort paid off and I'm quite happy with both of these images. The Whirlpool Galaxy is among the most spectacular and now I finally have a decent picture of it.

The Pinwheel Galaxy is another large and fairly bright galaxy so for a first try I think it came out pretty well. Both images could probably benefit from several more hours of exposure, but thats for another time.

Galaxies aren't the only thing up in the spring either. Among other things, the globular clusters shown below are overhead as well. 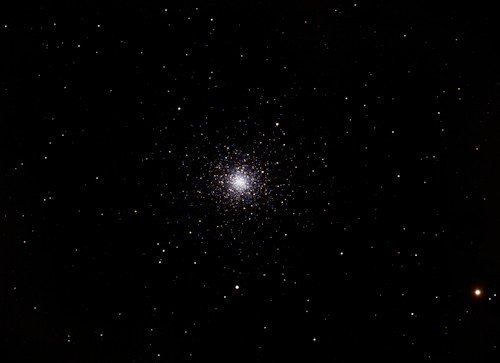 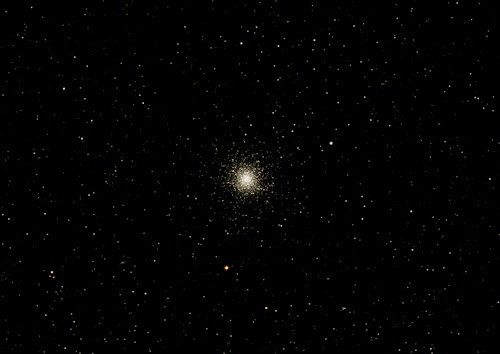 Both M3 and M13 were in a good position for imaging from my backyard. So, between the new moons in April and May I stayed home and did some testing.

That's because I finally bought a monochrome camera which included a filter wheel and full filter set.

These are the first results from the new camera. They were done with a couple of different scopes. M3 was done using the MN190 Maksutov-Newtonian and M13 is from the NP101is 4 inch refractor.

For a first try, things are looking good with the new camera. The M13 shot could use better color balance but otherwise the stars are fairly crisp and clear and (when balanced correctly) the colors look good too.

When new moon in May came around I took my shiny new camera back to the cabin and set up for another round of images. For a couple of reasons, things didn't go so well, but I still managed these three pictures.

The main problem was that there are very few hours of actual darkness up here in May. This, coupled with an several nights of bright (and spectacular on one occasion) aurora limited the total exposure time available.

M100 was my first dark-sky image taken with the 8300M camera. It came out somewhat noisy and could use a lot more exposure time.

M63 worked out better, it had less noise and better defined details.

And M64 probably came out the best. It took some work, but eventually it was color balanced fairly accurately.

The end result was that the galaxy shows up in white instead of tinted blue or red. And the details came out pretty nicely too and the stars are nice and round instead of ovals or misshapen blobs.

So, after a few tries, I was able to get pretty good results with the new camera.

And ultimately, galaxy season was pretty good to me this year. Even with the aurora, short nights and and one near disaster, things actually worked out very well. These are my best galaxy images to date and the results look promising for the next round.