These are the pictures from spring and summer of 2019. Below is the globular cluster M3. 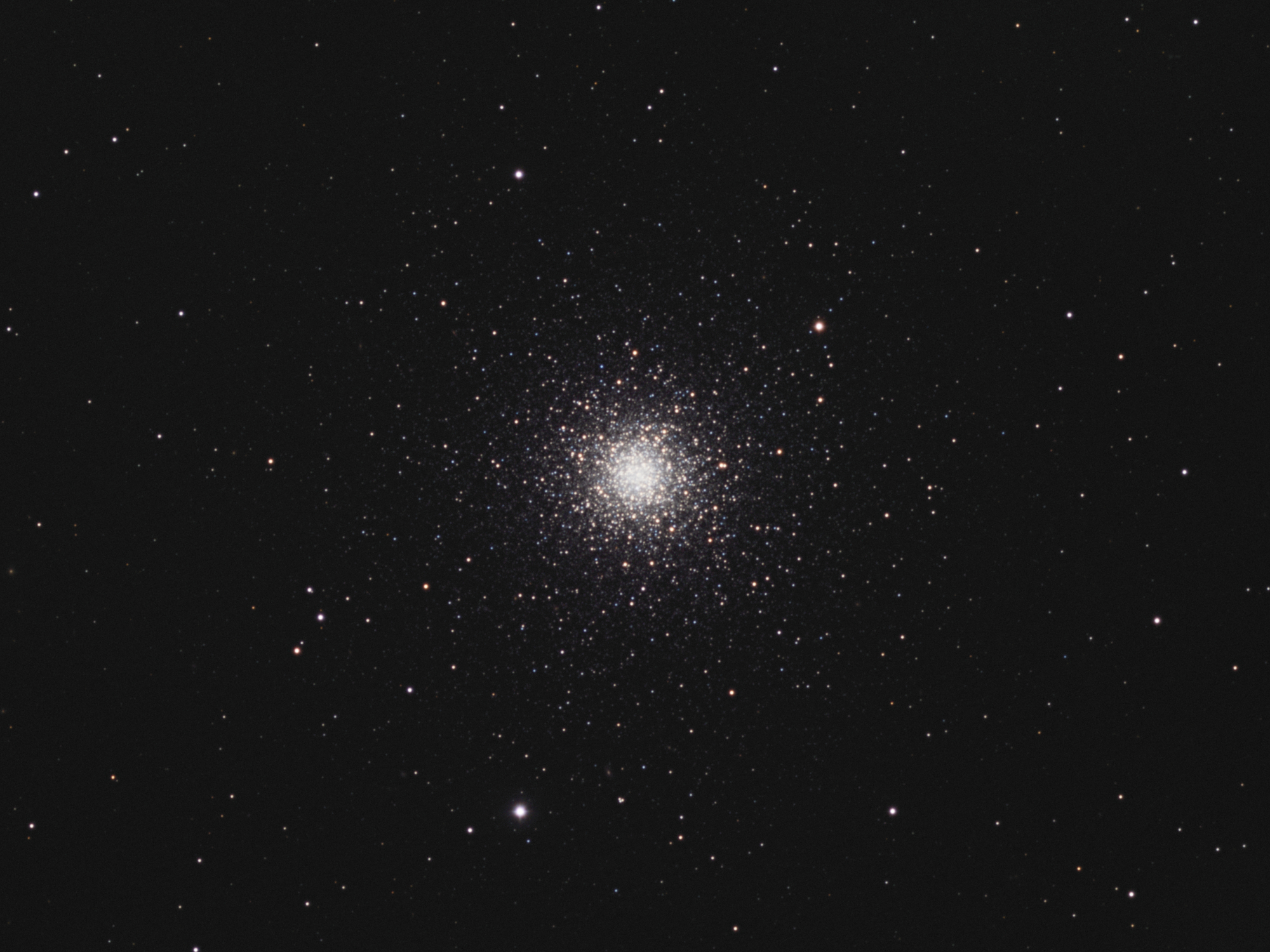 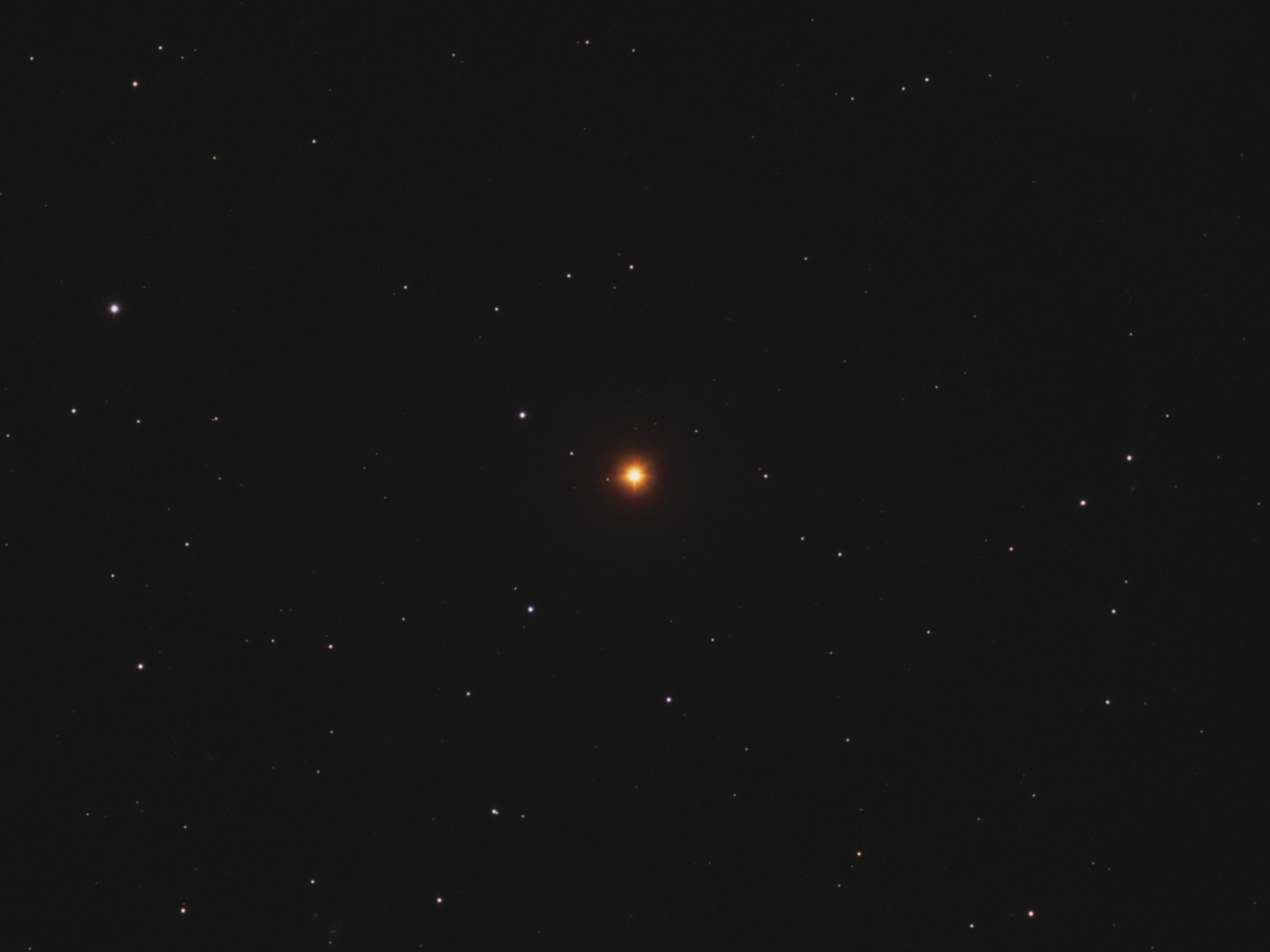 Y Canum Venticorum
This is one of the brightest and most spectacular of all carbon stars visible in the northern hemisphere. It is almost directly overhead in the spring and photographs well from the city.

La Superba is the striking red star in the center of the image. This is one of the reddest and brightest of all known carbon stars. Often abbreviated as Y CVn, this star is bright enough to be spotted with the naked eye, but it is best appreciated when viewed through binoculars or a telescope.

NGC 1528 - Open Cluster in Perseus
This is NGC 1528, an open star cluster in the constellation Perseus. This image was actually taken back in October of 2017 so it doesn't really belong in the spring and summer of 2019 collection. 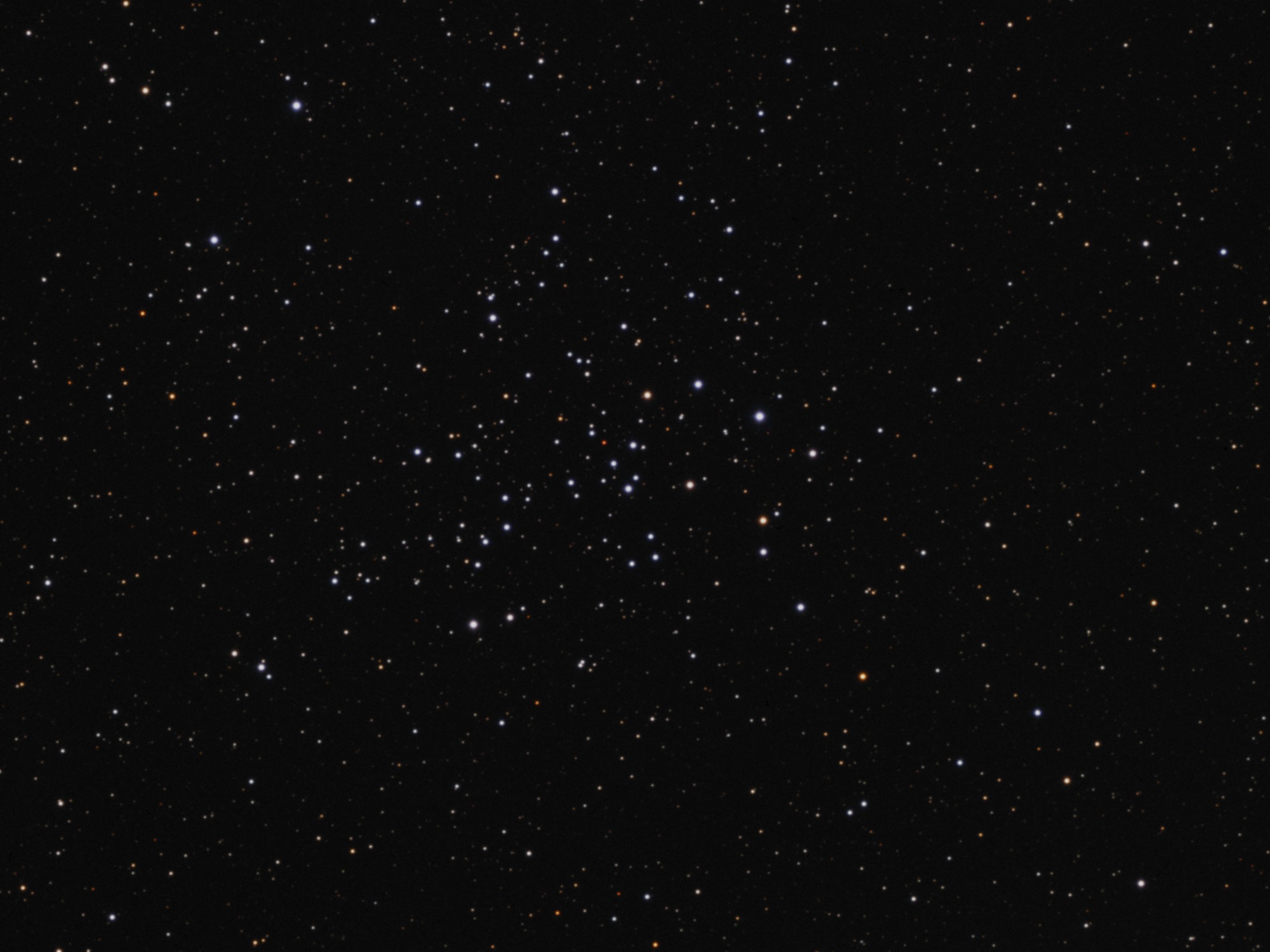 But for some reason it never made it up to the website at the time it was originally taken. I finally realized this and so I added it this time around.

The thumbnail showing here doesn't really show the cluster that well. It's pretty sparse and faint as far as open clusters go. But even so, I'm pretty happy with how the full size version turned out. In particular, it has very nice round stars across the fields. And the colors came out pretty nice.

According to my notes at the time, I took it as a really positive indicator that the new CFF132 refractor would work very well as an imaging scope. And so it has. All the other images in this release used that scope, and so have most of the images in the past few releases too.

V460 Cygni - Carbon Star in Cygnus
This is a one of the brighter carbon stars and it is located in the Cygnus constellation. V460 Cygni is almost directly overhead of my backyard in the mid summer and photographs nicely in well populated star field. 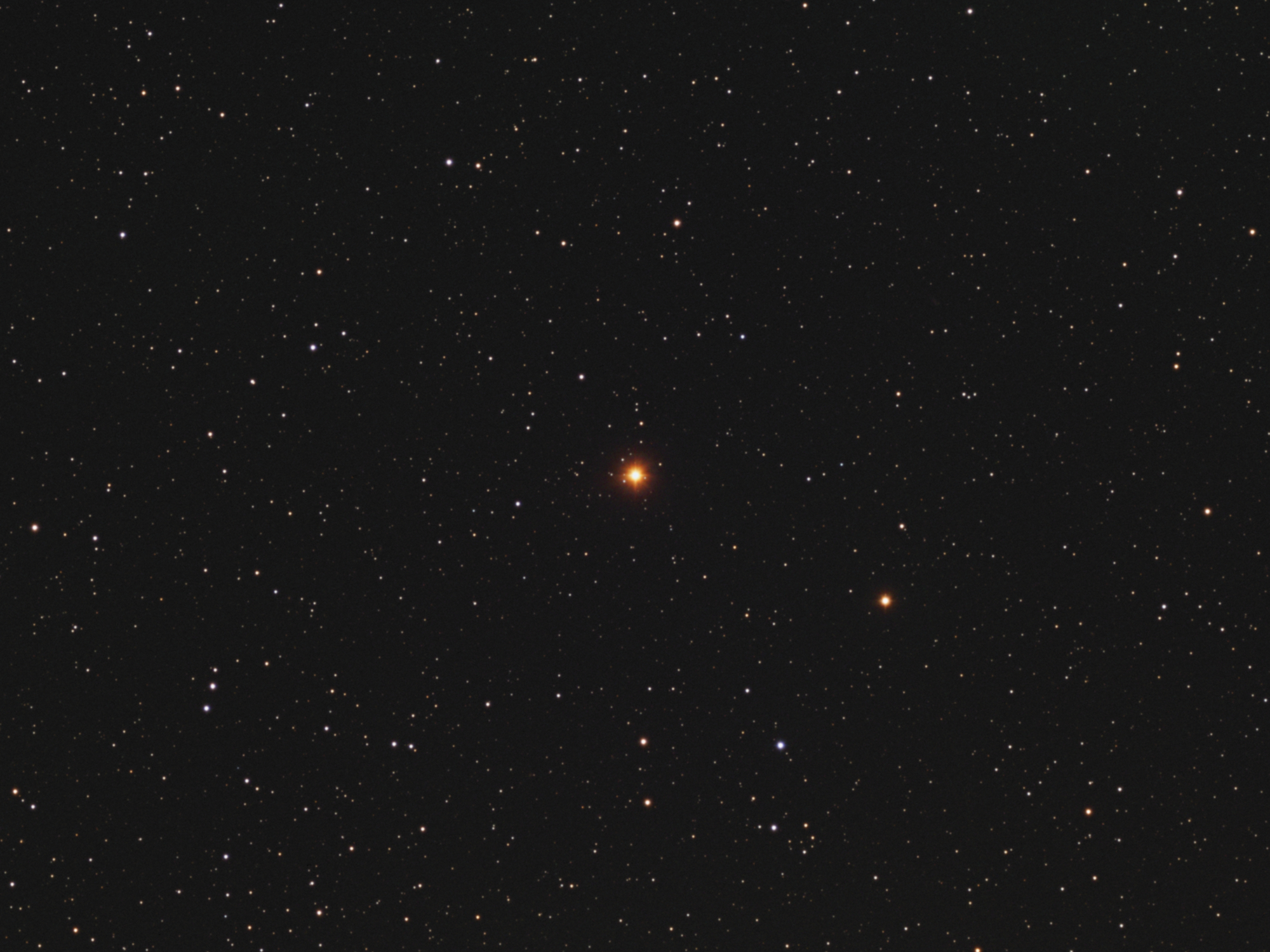 There is only about ninety minutes of data in this image. It was taken in mid-July. Around here that means the nights are about three hours of astronomical twilight. So what little nighttime we get is rather short and not terribly dark either.

And this year, we were rained out for most of the late spring and most of the summer too. So it turned out that in July, I was only able to get one night of imaging in anyway. And even then it was cut short by clouds and rain so I didn't even get the full three hours of what passes for darkness.

Still, ninety minutes is better than zero minutes and so this image is the latest addition the collection of carbon star images on this site.

Double Stars - New Image Gallery
There is a new gallery on the site and it contains the images of double stars, pairs of stars and multiple star systems that I have gathered over the past few years.

Double stars are stars that appear very close together. Pairs are brighter stars that are close enough to fit in the field of view. Multiple stars are complex systems that have three or more stars orbiting in them. 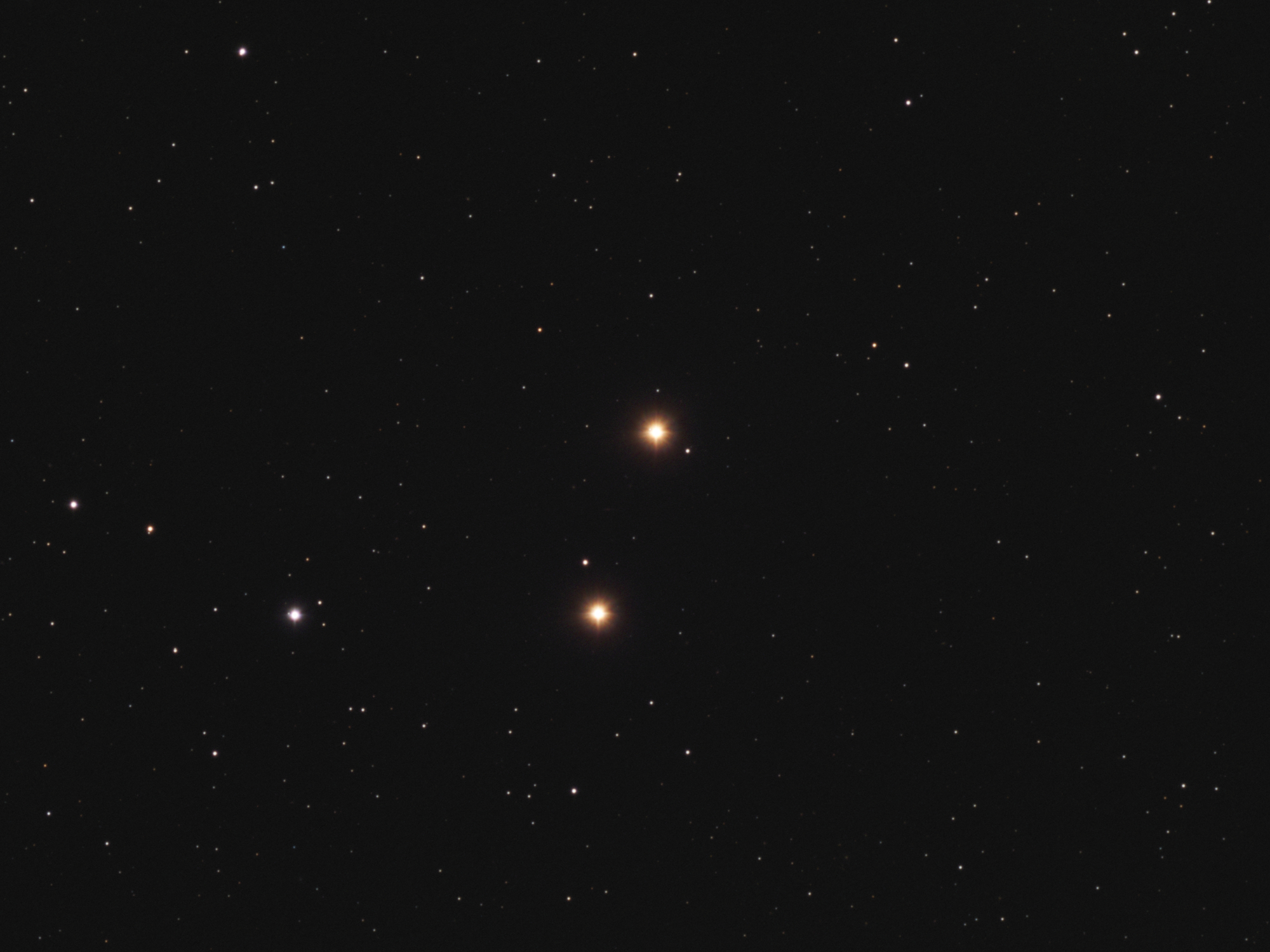 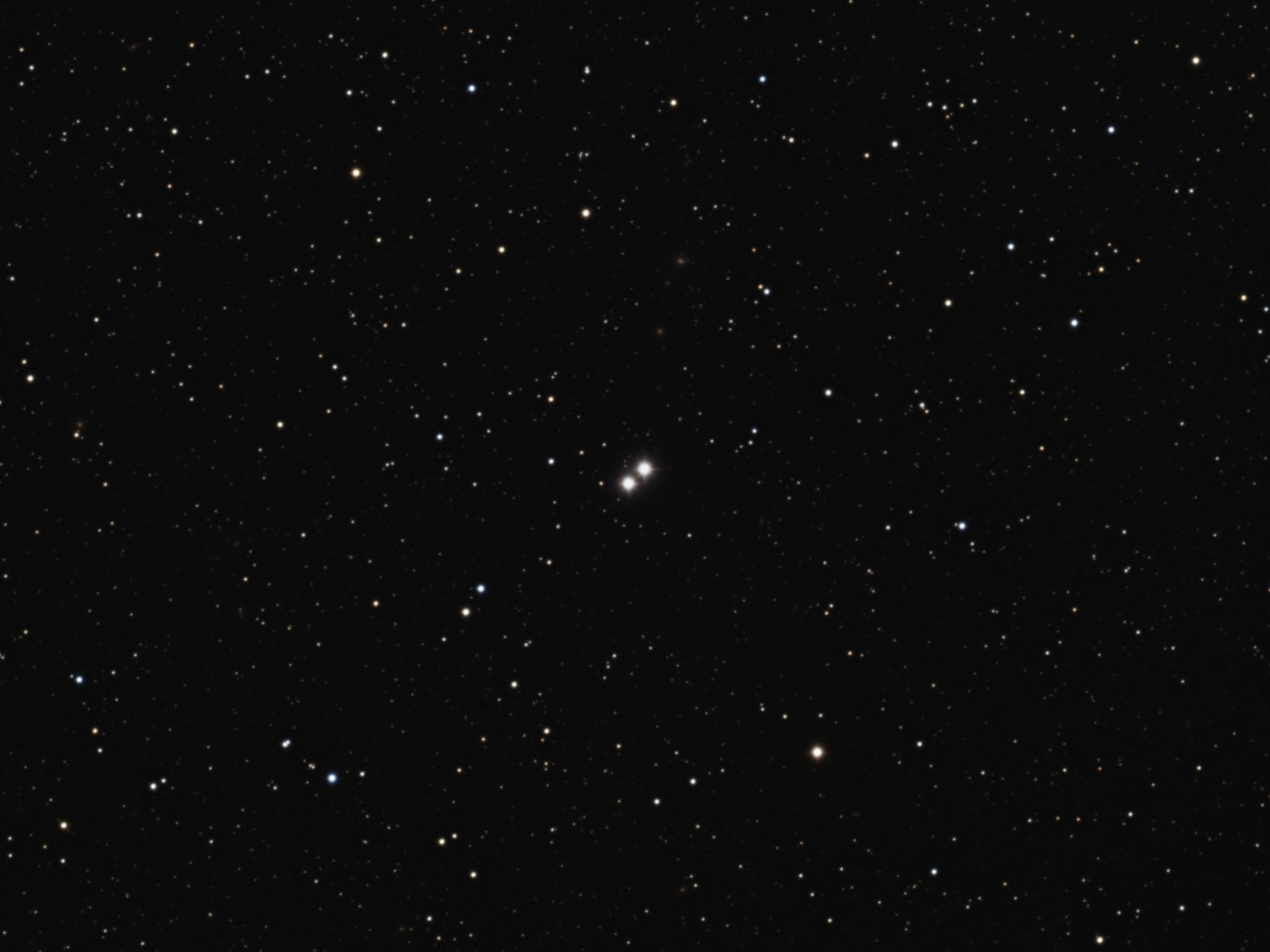 Many double stars are pairs of stars so close together they actually orbit around each other. 16 Cygni shown here is such a system. The two components, A and B do in fact orbit each other.

Doubles can also be uneven in size and brightness and they can sometimes orbit so closely that the smaller companion star is lost in the glare of the larger parent.

16 Cygni is a also good example of this type of system since the A component is actually a tight double itself and it is orbited by a much smaller red dwarf. The red dwarf (the C component) orbits so close and is so dim that it doesn't even show up in the image. So although 16 Cygni visually appears as a double, it is actually a multiple system consisting of at least three stars.

Optical doubles are stars that appear very close together but are not since one star is either much closer or further away from us than the other. Their apparent proximity only occurs because they line up together when viewed along our line-of-sight out into space.

Pairs are just stars that are bright and appear in the same field. Nu Coronae Borealis shown above is such a pair. It actually consists of ν1 CrB and ν2 Crb, two stars that are in the same region of space and in this case they are similar in color and brightness.

Visit the Double Star Gallery
Website Renovations Are Never Done
Last time I claimed that the website renovations were finally done. Well, maybe I was wrong. Just a wee bit. Because it turns out that website renovations are never actually finished. All that really happens is that I just stop doing them for a while.
(Which I actually knew all along since I've been writing computer code since, well, long before the internet even existed but anyway...)

And so it continues. This time around, the renovations mostly centered on making the site more mobile-friendly. For the most part, it meant converting any fixed width items to variable width. The updates also included some new icons and other navigational changes that should make it easier to use on a small screen.

Probably the most immediately noticable change is the heading at the top of the screen. I've removed the background image and most of the text and links. Now, there is only a logo, a simple title and a couple of menu icons in the top right. This really simplifies the site header and should help make it more usable on the small screens.

And on all screens, the zoom window now resizes to fit the available browser size. It works really nice for getting the maximum image on a giant TV screen and at the same time it still reduces right down to work acceptably on the very smallest of phone and tablet screens.

So hopefully the renovations are finally done after all... (haha good luck with that..)